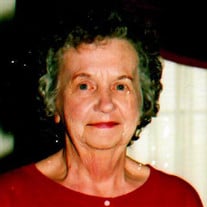 FAULKNER, Alice Jane, age 93, a long-time resident of Middletown, passed peacefully on Sunday, May 20, 2018 at Mt. Pleasant Retirement Village where she had resided for 18 months. She was born March 9, 1925 in Dayton, Ohio, and graduated from North Ridge High School, Dayton, class of 1943. She was the business partner with her husband of Middletown Window Cleaning. Alice Jane was a very devoted wife, mother, grandmother, great grandmother and great-great grandmother. Her love and dedication to her family will be the memories we all will cherish. She had such a zest for life—she enjoyed traveling, dancing, gardening, fishing and helped with many charitable organizations and had such a love for bingo and a good hand of poker. She was a member of the Eastview Baptist Church, the Women of the Moose #183, a volunteer at Hospice of Clearwater, Florida, Middletown Evening Optimist Club, and the Middletown Senior Citizens where she called Bingo. Preceding her in death were her parents, William and Hazel Whitescarf Aunspaw; her husband of 63 years, Edward E. Faulkner, Sr. in 2005; three brothers, J. T., Benny and Paul Aunspaw; and two sisters, Marion Tuftts and Jenny Huffley. She is survived by three sons, Edward E. (Sue) Faulkner, Jr., Thomas William (Betty Jo) Faulkner and Ron Faulkner; ten grandchildren: John Andrew (Danielle) Medley, Tamara Faulkner (Ron) Groh, Chris (Shelly) Faulkner, Jeff (Angie) Faulkner, Michelle Faulkner (Matt) Gilbert, Heather Faulkner Stull, Thomas “Butch (Tricia) Faulkner, Mike (Christie) Faulkner and Tiffanie Faulkner (Jake) Routson, and Stephanie Kennedy; thirty great grandchildren; five great-great grandchildren; two sisters, Carolyn Barrett and Dawn (Jack) Jones; daughter-in-law, Sonja (George) Gilles; Ms Peggy Kennedy, her loving and devoted angel who was her best friend and like a daughter and was always there for her; and many nieces, nephews, extended family and friends. Visitation will be Tuesday, May 29, 2018 from 11:00 a.m. to 1:00 p.m. at the Herr-Riggs Funeral Home, 210 S. Main St., Middletown, followed by funeral services at 1:00 p.m. with Pastor Dwaine Tilford officiating. Interment will be at the Butler County Memorial Park, Trenton, Ohio. In lieu of flowers, memorial contributions may be made in her name to a charity of one’s choice. Arrangements by Herr-Riggs Funeral Home, 210 S. Main St., Middletown. Condolences may be sent to the family at www.herr-riggs.com

FAULKNER, Alice Jane, age 93, a long-time resident of Middletown, passed peacefully on Sunday, May 20, 2018 at Mt. Pleasant Retirement Village where she had resided for 18 months. She was born March 9, 1925 in Dayton, Ohio, and graduated from... View Obituary & Service Information

The family of ALICE JANE FAULKNER created this Life Tributes page to make it easy to share your memories.

Send flowers to the FAULKNER family.