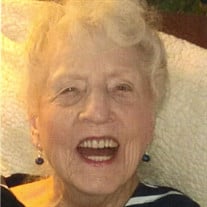 HAMMER, Arneth Irene “Renee”, age 93, of Middletown, Ohio, answered her final call on Tuesday, August 22, 2017 at Hospice of Butler and Warren Counties. She was born September 10, 1923 in Elkins, West Virginia. She had resided in Middletown since 2013. Renee was employed as a dispatcher at Laurel, Maryland Police Department. Years earlier she was a switchboard operator in Detroit, Michigan. She also ran a prayer-line for many years for her church in Laurel and in Elkins. Preceding her in death were her husband, Lawrence “LP” Hammer; and son, Robert “Michael” Hammer. She is survived by one daughter-in-law, Beverly Dawn Hammer; three grandchildren, James (Lesa) Hammer, Barbara (Richard) Bushor, and Brian Hammer; seven great grandchildren; twelve great-great grandchildren; one great-great-great granddaughter; and many other family members across the country. Visitation will be Saturday, August 26, 2016 from 1:00 p.m. to 2:00 p.m. at the Herr-Riggs Funeral Home, 210 S. Main St., Middletown, Ohio followed by services at 2:00 p.m. with Dr. Dan Flory officiating. Private interment will be at the Crownsville Veterans Cemetery, Crownsville, Maryland. In lieu of flowers, memorial contributions may be made to Hospice of Butler and Warren Counties, 5940 Long Meadow Drive, Franklin, Ohio 45005. Arrangements by Herr-Riggs Funeral home, 210 S. Main St., Middletown. Condolences may be sent to the family at www.herr-riggs.com

The family of ARNETH IRENE "RENEE" HAMMER created this Life Tributes page to make it easy to share your memories.

Send flowers to the HAMMER family.