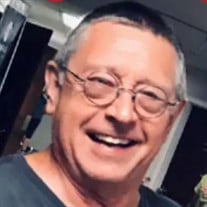 PROPPS, Barry A., age 67, of Monroe, Ohio, went to be with his Lord on Wednesday, September 15, 2021 at his residence with his family by his side. He was born August 5, 1954 in Hamilton, Ohio and lived in Monroe all his life. He graduated from Lemon-Monroe High School Class of 1972. Barry was employed in maintenance at the zinc grip department at AK Steel retiring in 2006 after 34 years of service. He then was employed at Tenneco in Kettering from 2007 to 2012. Barry was a member of the Monroe First Church of God, where he served as a Greeter. Many folks in the church referred to him as Number One Greeter because of his friendly, outgoing personality. He was loved so much by his church family and everyone who knew him. He was also a member of the Moose Lodge #501, enjoyed vegetable gardening, and was an avid sports fan of his children’s and grandchildren’s sports activities. Barry was a huge advocate for the youth. He spent so much time coaching and loving kids. Preceding him in death was his father, Charles E. Propps; and one brother, Charles R. Propps. He is survived by his wife of 47 years, Myron Propps; two children, Shannon Propps Duff and husband Rick and Shane Propps and wife Julie; four grandchildren, Adam Duff, Madalyn Duff, Brady Propps and Harlie Propps; his mother, Frances (Burgemeir) Propps; two brothers, Maurice Propps and Tim Propps; and several nieces, nephews, extended family and a host of friends. Visitation will be Tuesday, September 21, 2021 from 12 noon to 2:00 p.m. at the Monroe First Church of God, 100 Easton Manor Drive, Monroe, Ohio 45050, followed by services at 2:00 p.m. with Pastor Terry Ball, Pastor Mick Salyer and Pastor Rick Duff, his son-in-law, officiating. Interment will be at Mound Cemetery, Monroe. In lieu of flowers, memorial contributions may be made to the church youth groups – RUSH and Exit 29, in care of the Monroe First Church of God or to Queen City Hospice, 4605 Duke Dr., Suite 220, Mason, Ohio 45040. Arrangements by Herr-Riggs Funeral Home, 210 S. Main St., Middletown. Condolences may be sent to the family at www.herr-riggs.com

PROPPS, Barry A., age 67, of Monroe, Ohio, went to be with his Lord on Wednesday, September 15, 2021 at his residence with his family by his side. He was born August 5, 1954 in Hamilton, Ohio and lived in Monroe all his life. He graduated... View Obituary & Service Information

The family of BARRY A. PROPPS created this Life Tributes page to make it easy to share your memories.

Send flowers to the PROPPS family.