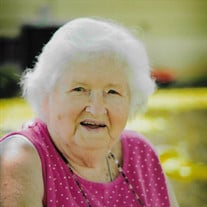 POWELL, Bernice, age 92, of Monroe, Ohio, passed away Friday, November 9, 2018 at her residence. She was born October 15, 1926 in Pike County, Illinois and moved to Ohio in the 1940’s. She was employed for many years as a file clerk for the Middletown Board of Education. Bernice was a member of the GracePointe Nazarene Church of Trenton, and was also a Sunday School Teacher. She enjoyed spending time with her family, garage sales, eating out, watching T.V. and her Euchre Club. Preceding her in death were her parents, Edward Amos and Laura Bell (Modglin) Young; her husband, Leonard Powell in 1996; two sons, David Wayne Wheeler and Terry Tucker; five brothers, Jack, Jim, Ronnie, Wayne and Kenny; and three sisters, Opal, Esther and Mary. She is survived by three children, Gail (Mark) beamer, Denise Morris and Dean Tucker; many grandchildren and great grandchildren; one brother, Samuel (Gil) Young; one sister, Daisy Kennedy; and many nieces, nephews, extended family and friends. Visitation will be Tuesday, November 13, 2018 from 12:00 noon to 1:00 p.m. at the GracePointe Nazarene Church, 220 N. Miami Street, Trenton, Ohio 45067, followed by funeral services at 1:00 p.m. with Pastor John Young officiating. Interment will be at Butler County Memorial Park, Trenton, Ohio. Arrangements by Herr-Riggs Funeral Home, 210 S. Main St., Middletown. Condolences may be sent to the family at www.herr-riggs.com

The family of BERNICE POWELL created this Life Tributes page to make it easy to share your memories.

Send flowers to the POWELL family.