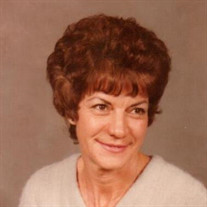 JACKSON, Beverly F., age 83, formerly of Middletown, passed away Monday, February 10, 2020 at Hawthorn Glen Senior Living Campus where she had resided for one year. She was born March 22, 1936 in Middletown, and lived here all her life. Beverly... View Obituary & Service Information

The family of BEVERLY FAY JACKSON created this Life Tributes page to make it easy to share your memories.

Send flowers to the JACKSON family.