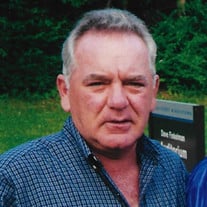 HOLCOMB, SR., Claude Jesse, being the world’s greatest husband, father, brother and grandpa, passed away peacefully in his Middletown home on Saturday, December 1, 2018. He left his family’s side to sit at Jesus’ feet. He was born August 8, 1950 in Millstone, Kentucky to Willie T. and Edna (McCray) Holcomb. Claude was the youngest of 14 children, 11 boys and 3 girls. He was drafted to the Army in 1970, sent to Vietnam, and proudly served until 1972 as a Specialist E-4. Claude worked as an auto mechanic for many years and retired after 15 years from Best One Tire as an alignment specialist. He was an avid University of Kentucky Basketball fan. Preceding him in death are his parents; eight brothers, Clyde, Prince F., Billy Jack, John, Edward Arnold, Lonnie, Philip and Fate; and two sisters, Willa Mae McCarthy and Cora Davis. Claude is survived by his loving wife of 36 years, Sandy Holcomb; one son, Claude Jesse (Brittany) Holcomb, Jr.; one granddaughter, Hannah “Hanner Nanner” Holcomb; two brothers, Archie Holcomb and Wes (Mary) Holcomb; one sister, Sue Bair; and many nieces, nephews, cousins, extended family and friends. Visitation will be Saturday, December 8, 2018 from 10:00 a.m. to 12:00 noon at the Herr-Riggs Funeral Home, 210 S. Main St., Middletown, followed by services at 12:00 noon with his son, Minister Claude Holcomb, Jr. and Minister Charles Hall officiating. Interment will be at Rosehill Burial Park, Hamilton, Ohio, with military service by the Middletown Combined Honor Guard. Memorial contributions may be made to Wounded Warriors. Arrangements by Herr-Riggs Funeral Home, 210 S. Main St., Middletown. Condolences may be sent to the family at www.herr-riggs.com

HOLCOMB, SR., Claude Jesse, being the world&#8217;s greatest husband, father, brother and grandpa, passed away peacefully in his Middletown home on Saturday, December 1, 2018. He left his family&#8217;s side to sit at Jesus&#8217; feet. He... View Obituary & Service Information

The family of CLAUDE JESSE HOLCOMB SR created this Life Tributes page to make it easy to share your memories.

Send flowers to the HOLCOMB family.