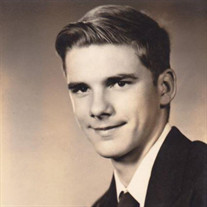 CHANGE OF PLACE OF SERVICE DUE TO THE WEATHER PREDICTIONS CELEBRATION OF LIFE WILL BE SUNDAY, OCTOBER 3, 2021 WILL BE AT OTTERBEIN SENIOR LIVING - PHILLIPI HALL, 585 N. ST. ROUTE 741, LEBANON, OHIO 45036, AT 2:00 P.M., WITH RECEIVING OF FAMILY AND FRIENDS AT 1:30 P.M. IF YOU HAVE QUESTIONS CALL TAMMY AT 513-267-6368 FISHER, III, D.O., age 84, of Lebanon, Ohio passed away September 21, 2021 at his residence at Otterbein Senior Life Community in Lebanon. He was born December 11, 1936 in Middletown, Ohio and lived in this area all his life. He graduated from Middletown High School Class of 1954. He was a scheduler of operations at Armco Steel for 30 years retiring in 1983. He also was a realtor for Blanton and Woodland Realty Companies for 45 years. D.O. was baptized at the First Baptist Church of Middletown. He was a founding member of the Pacemakers Car Club and a member of Ace Car Club both of Middletown. Preceding him in death were his mother, Theda Maxine (Roshon) Fisher in 2001 and his father, Daniel Owen (D.O.) Fisher, Jr. in 1970; one grandson, Dusty Fisher in 2001; and one sister, Penny Suellen Melton in 2013. He is survived by his wife of 66 years on October 1, 2021, Evalee Denison Fisher; four children, D.O. “Denny” Fisher IV, Donny (Missy) Fisher, Tammy (Kim) McMonigle and Tara (Scott) Dill; eleven grandchildren, Brandy, Sean, Kandace, Evan, Braden, Hyland, Lydia, Dakota, Donovan, Dylan, Raleigh; ten great grandchildren, Isa, Victoria, Maddie, Aubrey, Kata, Nolan, Emi, Kinsley, Hayes and Brinley; two brothers, John Fisher (fiancée Shirley Walls) and James (Ruby) Fisher; one sister, Judy Gentry; and many extended family and friends. A Celebration of Life will be held on Sunday, October 3, 2021 beginning at 2:00 p.m. at Warren County Armco Park, 1223 Ohio Route 741, Lebanon, Ohio 45036, at Shelter 29 by the lake (look for the signage in the park along the way directing you to the shelter) with his son-in-law, Pastor Scott Dill officiating. A meal, fellowship and sharing of memories will follow the service. All floral and other gifts should be delivered to the park to Shelter 29, on the day of the service. Arrangements by Herr-Riggs Funeral Home, 210 S. Main St., Middletown. Condolences may be sent to the family at www.herr-riggs.com

CHANGE OF PLACE OF SERVICE DUE TO THE WEATHER PREDICTIONS CELEBRATION OF LIFE WILL BE SUNDAY, OCTOBER 3, 2021 WILL BE AT OTTERBEIN SENIOR LIVING - PHILLIPI HALL, 585 N. ST. ROUTE 741, LEBANON, OHIO 45036, AT 2:00 P.M., WITH RECEIVING OF FAMILY... View Obituary & Service Information

The family of D. O. FISHER III created this Life Tributes page to make it easy to share your memories.

CHANGE OF PLACE OF SERVICE DUE TO THE WEATHER PREDICTIONS
CELEBRATION...

Send flowers to the FISHER family.