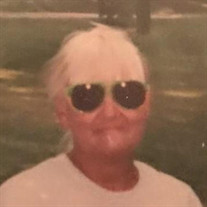 STAMPER, Diana J. “Dizzy”, age 74, of Gratis, Ohio, passed away Wednesday, November 3, 2021 at her residence. She was born April 12, 1947 in Middletown and lived in this area all her life. She was a wife, mother and homemaker. She especially enjoyed driving her Red 1980 Corvette. Preceding her in death were her parents, Walter and Doris (Hall) Davis; one nephew, Travis Myers; and one brother-in-law, Terry Myers. She is survived by her husband of 52 years, Vern Stamper; one son, Dwayne D. Davis; three grandchildren, Courtney Davis (Troy McCarty), Sierra Davis and Dagan Davis; three great grandchildren, Brock McCarty, Moser McCarty and Holley McCarty; one brother, Walter Davis, Jr. (Janet), three sisters, Leslie Davis, Pam Griffith (Larry) and Janet Myers; and many nieces, nephews, extended family and friends. There will be a Celebration of Life for Diana on Saturday, November 6, 2021 from 2:00 p.m. to 6:00 p.m. at her residence, 401 East South Street, Gratis, Ohio 45330. In lieu of flowers, memorial contributions may be made to the Multiple Sclerosis Society. Arrangements by Herr-Riggs Funeral Home, 210 S. Main St., Middletown. Condolences may be sent to the family at www.herr-riggs.com

The family of DIANA J. "DIZZY" STAMPER created this Life Tributes page to make it easy to share your memories.

Send flowers to the STAMPER family.