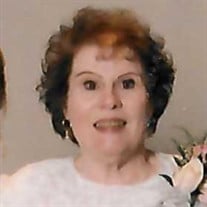 MULHALL, Edith L., age 88, of Middletown, Ohio, passed away Tuesday, December 8, 2020 at Heritagespring Health Care Center of West Chester, where she had resided for one year. She was born November 2, 1932 in Middletown and lived here all her life. Edith went to Holy Trinity School up to grade ten, then graduated from Middletown High School Class of 1950, and received her Bachelor’s Degree from Bowling Green State University in 1954. She was employed as a secretary in the Engineering Department at Armco International for five years, then taught remedial math and reading at Middletown Public Schools while being a homemaker and mother, then was a sales clerk at McAlpin’s retiring in 2000. Edith was a member of Holy Family Parish – Holy Trinity Church where she was a member of the choir. She was a member of Phi Beta Psi Sorority and Forest Hills Country Club. She enjoyed playing Bridge and was an avid golfer. Preceding her in death were her parents, Harold and Margaret (Hall) Norris; her husband Harvey Mulhall in 1978, and one brother, Wayne “Buzzy” Norris in 2020. She is survived by three children, Martin E. (Terri) Mulhall, Pamela J. (Shawn) Mulhall-Smith and James D. Mulhall; eight grandchildren, Leah (Dillon) Banks, Brendan Mulhall, Colleen Mulhall, Riley Smith, Liam Smith, Aidan Smith, Anna Mulhall and Andrew Mulhall; one brother, Robert (Ann) Norris; one sister, Joan Scalia; and several nieces, nephews, extended family, church family and friends. Visitation will be Monday, December 14, 2020 from 10:00 a.m. to 11:00 a.m. at the Holy Trinity Church, 201 Clark St., Middletown, Ohio 45042, followed by Mass of Christian Burial at 11:00 a.m. with Rev. John Civille as Celebrant. Interment will be at Woodside Cemetery, Middletown, Ohio. Memorial contributions may be made to Phi Beta Psi, in care of Marilyn Temple, 4700 Sebald, Franklin, Ohio 45005, with the notation In Memory of Edith Mulhall. Arrangements by Herr-Riggs Funeral Home, 210 S. Main St., Middletown. Condolences may be sent to the family on this website, www.herr-riggs.com

MULHALL, Edith L., age 88, of Middletown, Ohio, passed away Tuesday, December 8, 2020 at Heritagespring Health Care Center of West Chester, where she had resided for one year. She was born November 2, 1932 in Middletown and lived here all her... View Obituary & Service Information

The family of EDITH L. MULHALL created this Life Tributes page to make it easy to share your memories.

Send flowers to the MULHALL family.