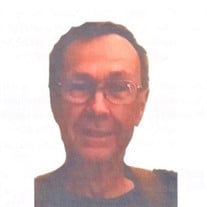 FAULKNER, JR., Edward Earl, age 74, of Hamilton, Ohio, passed away peacefully after a hard-fought battle with cancer on Wednesday, September 23, 2020 at Hospice of Butler and Warren Counties. Graveside services have been scheduled for Friday, October 30, 2020 at 1 p.m. at the Dayton National Cemetery, with interment following. He was 21 days shy of 75. Ed was born on October 15, 1945 in Dayton, Ohio. He was a graduate of Middletown High School, class of ’64 and a veteran of the United States Air Force. He was stationed in Germany where he “had more fun than legally allowed.” Preceding him in death were his parents, Edward and Alice (Aunspaw) Faulkner, Sr. He is survived by his wife of 35 years, Sue (Cole) Faulkner of Hamilton; children, Tamara (Ron) Groh of Middletown, Michelle (Matt) Gilbert of Fishers, Indiana and John Andrew (Danielle) Medley of Middletown. Ed also known as “Opa”, leaves behind thirteen beautiful grandchildren: Jesse (Jill), Jordan, Julie, and Joni Groh; Evan, Alex, Abby, and Josh Gilbert; Courtney, Hailey, Olivia, Cody and Sophia Medley; brothers, Tom (Betty Jo) Faulkner and Ron Faulkner; uncle and aunt, Jack and Dawn (Aunspaw) Jones; sisters-in-law, Faye and Dorothy Cole; brother-in-law Dennis and friend, Peggy Kennedy; and Mark Williams, who was more like a brother than a boss; as well as many nieces, nephews, cousins, extended family and close friends. Ed was previously a co-owner of Middletown Window Cleaning and Janitorial Services and Blinds Express of Hamilton. He was an entrepreneur extraordinaire, “jack of all trades” and an avid rockhound who enjoyed bluegrass music, the flea market, and fishing. He loved hanging out at Red’s and Village Perks with his coffee buddies, solving the world’s problems while enjoying endless coffee and double scoops of chocolate ice cream. He had many talents and never knew a stranger. To his friends he had many special nicknames, such as: Fast Eddie, Blind Man, Driver’s Ed, Eddie Spaghetti and Special Ed. His family and friends will miss him dearly. Professional arrangements were entrusted to WE Lusain Funeral Home, Dayton, Ohio. A Celebration of Life will be scheduled at a later date. In lieu of flowers, donations may be made to Hospice of Butler and Warren Counties. Condolences may be sent to the family on this website, www.herr-riggs.com

FAULKNER, JR., Edward Earl, age 74, of Hamilton, Ohio, passed away peacefully after a hard-fought battle with cancer on Wednesday, September 23, 2020 at Hospice of Butler and Warren Counties. Graveside services have been scheduled for Friday,... View Obituary & Service Information

The family of EDWARD EARL FAULKNER JR created this Life Tributes page to make it easy to share your memories.

Send flowers to the FAULKNER family.