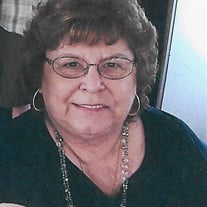 HOLLON, Elaine “Boots”, age 76, of Middletown, Ohio passed away Thursday, January 10, 2019 at her residence. She was born May 26, 1942 in Middletown and lived in the Miami Valley area all her life. She was the owner/operator of Boots Floral Designs for 10 years. She had also been a tax preparer for E-Tax for over 30 years. She was a member of Deliverance Tabernacle and a lifetime member of D.A.V. Preceding her in death were her parents, James David and Carrie (Zornes) Bullock; one daughter, Danielle Woodward; one step-son, David Hollon; and two brothers, David and Wayne. She is survived by her husband of 35 years, Frank D. Hollon; four children, Dan (Yun) Woodward, Michelle “Mickey” Howard, John (Angie) Woodward and Susie (Clarence) Kidwell; three step-children, Danny Hollon (Rachelle), Donna (David) Leach; and Frank Neal (Jackie) Hollon; fourteen grandchildren including grandson, Tyler Howard, who she helped raise; 47 great grandchildren; one brother, Raymond (Diane) Ross; one sister, Debbie Freeman; and many nieces, nephews, extended family and friends. Visitation will be Monday, January 14, 2019 from 5:00 p.m. to 7:00 p.m.at the Herr-Riggs Funeral Home, 210 S. Main St., Middletown. Funeral services will be Tuesday, January 15, 2019 at 1:00 p.m. at the funeral home with Pastor David Zornes officiating. Interment will be at Butler County Memorial Park, Trenton, Ohio. Memorial contributions may be made to the American Lung Association. Arrangements by Herr-Riggs Funeral Home, 210 S. Main St., Middletown. Condolences may be sent to the family at www.herr-riggs.com

The family of ELAINE "BOOTS" HOLLON created this Life Tributes page to make it easy to share your memories.

Send flowers to the HOLLON family.