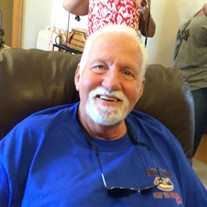 KOONTZ, Elmer E. “Peanut”, age 81, of Middletown, Ohio, passed away Monday, May 18, 2020 at his residence. He was born December 7, 1938 in Richmond, Indiana but lived in Middletown most of his life. He graduated from Lemon-Monroe High School Class of 1956, where he played on the basketball and baseball sports teams. He was employed as a machinist at AK Steel for 40 years, retiring in 1999. He was a member of American Legion Tap Room and Moose Lodge 501. He was an avid golfer and bowler, and played in the softball Armco league. He was a former member of the men’s Auxiliary of the D.A.V. Chapter 131. Preceding him in death were his father, Robert Koontz; and his mother, Bertha Hensley Vanderpool. He is survived by his wife of 26 years, Barbara Adams Koontz; four children, Rick (Loretta) Koontz, Rob (Becky) Koontz, Joey (Bobbie) Koontz and Chris (Stacy) Koontz; four step children, Rochelle (Brian) Taylor, Julie Back, Jill Santos and Jeff Conover; six grandchildren, Heather, Scott, Donnie, Alex, Matt, Micah, Lily; seven great grandchildren and a host of friends. A greeting time for family and friends will be Friday, May 22, 2020 from 1:00 p.m. to 2:00 p.m. at the Herr-Riggs Funeral Home, 210 S. Main St., Middletown, followed by a Celebration of Life Service at 2:00 p.m. with Chaplain Vaugh Lewis of Hospice of Middletown officiating. Private interment at the convenience of the family at Butler County Memorial Park, Trenton, Ohio. In lieu of flowers, memorial contributions may be made to Hospice Care of Middletown, 4418 Lewis St., Middletown, Ohio 45044. Arrangements by Herr-Riggs Funeral Home, 210 S. Main St., Middletown. Condolences may be sent to the family at www.herr-riggs.com

The family of ELMER E. "PEANUT" KOONTZ created this Life Tributes page to make it easy to share your memories.

Send flowers to the KOONTZ family.