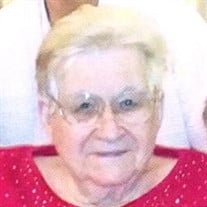 Beebe, Emma L. age 100, of Middletown, passed away peacefully at home on Wednesday, October 30, 2019. Emma was born in Frenchburg, Kentucky on December 19, 1918, to parents William R. and Fannie Cannoy. She was a lifelong Middletown resident. She was a member of the Faith United Methodist Church for over 60 years, and an active member of the IWIDOMBE Sunday School class. She then attended the Faith United Church. Emma served as a Red Cross volunteer at Middletown Regional Hospital and Atrium Medical Center for over 50 years. Emma was an avid bowler and was inducted into the Middletown Women’s Bowling Hall of Fame for Meritorious Service in 1998. She enjoyed playing bingo with her friends at St. John’s and Roosevelt Blvd. She served as a Girl Scout leader and was a poll worker for the Butler County Board of Elections for over 40 years. Emma is survived by 3 daughters: Janet (Cal) Calvert, Livingston, AL; Joyce (Mike) Friedrich, Pittsburgh, PA; and Marla and Abe Merdinger, her devoted caregivers. She has 2 grandchildren: Ryan Friedrich (Heather Campbell) and Emily Friedrich (Rodrigo Perez-Segnini). She was preceded in death by her husband Richard C. Beebe, son Richard J. Beebe, and infant daughter Mary Jeanne. Visitation will be held on Monday, November 4, 2019 from11:00 a.m to 1:00 p.m. with funeral services following at 1:00 p.m., at Herr-Riggs Funeral Home, 210 S. Main St., Middletown, with Pastor Todd Velte officiating. Interment will be at Woodside Cemetery. Memorial donations may be made to the charity of one’s choice. The family would like to thank the doctors who helped Emma through the rough patches: Doctors Amit Jain, Barry Robertson, and Robert Roman. Also, thanks to Lorna Tucker, Karen Koenig, and Sheila Pertusset for their loving care. Arrangements by Herr-Riggs Funeral Home, Middletown. Condolences may be sent to the family at www.herr-riggs.com

Beebe, Emma L. age 100, of Middletown, passed away peacefully at home on Wednesday, October 30, 2019. Emma was born in Frenchburg, Kentucky on December 19, 1918, to parents William R. and Fannie Cannoy. She was a lifelong Middletown resident.... View Obituary & Service Information

The family of EMMA L. BEEBE created this Life Tributes page to make it easy to share your memories.

Send flowers to the BEEBE family.