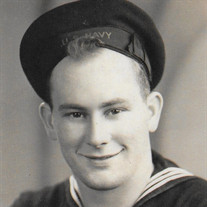 BROWN, Francis Eugene “Gene”, age 93, of Trenton, Ohio, passed away Wednesday, February 20, 2019 at Huntington Court in Hamilton where he had resided for one month. He was born July 22, 1925 in Clearfield, Iowa and moved to Ohio in 1972. Gene served in the U.S. Navy during W.W. II. He was employed as a Field Service Representative for Ruan Transportation Management Systems for 15 years, and then as a mechanic for UniFirst Uniforms in Franklin for several years, retiring when he was 62. He was a lifetime member of AmVets in Cedar Falls, Iowa, and enjoyed working on cars. Preceding him in death were his parents, Francis Monroe and Margaret beryl (Plants) Brown; his wife, Gloria Brown in 2013; one granddaughter, Katey; one brother Russell; and three sisters, Norma, Patricia and Cleta. He is survived by three children, Carol (Jerry) Roberts, Thomas (Jane) Brown, and Susan Jackson; four grandchildren, Stephanie, Cindy, Matthew and Kevin; four great grandchildren, Nick, John, Emery and Baylor; and many nieces, nephews, extended family and friends. Visitation will be Tuesday, February 26, 2019 from 11:00 a.m. to 12:00 noon at the Woodside Cemetery Chapel, 1401 Woodside Blvd., Middletown, followed by services at 12:00 noon with Pastor Keith Risner officiating. Interment will follow at Woodside Cemetery with Military Honors by Franklin V.F.W. Post 7596 at the graveside. Memorial contributions may be made to the family in care of Herr-Riggs Funeral Home, 210 S. Main St., Middletown, Ohio 45044. Phone: 513-422-4545. Condolences may be sent to the family at www.herr-riggs.com

The family of FRANCIS EUGENE "GENE" BROWN created this Life Tributes page to make it easy to share your memories.

Send flowers to the BROWN family.