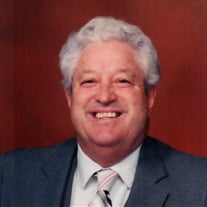 MORRIS, Gerald W. “Gerry”, age 84, of Trenton, Ohio, passed away Friday, December 8, 2017 at Garden Manor Retirement Village where he had been a patient for one week. He was born March 18, 1933 in Lee County, Virginia. He served in the U.S. Air Force during the Korean Conflict, and moved to Ohio after his honorable discharge from the service. He was a Technician for Ohio Bell/A.T.& T. for 38 years. Gerry was a lifetime member of the D.A.V. and the V.F.W. of Overpeck, and a member of the American Legion Post 218 of Middletown. He enjoyed spending time with his family and tending his vegetable garden. He was an outdoorsman, and had a great sense of humor. Preceding him in death were his parents, Andrew H. and Beatrice (Flonory) Morris. He is survived by his wife of 33 years, Glenna Morris; two sons, Mark (Melissa) Morris and Stuart Morris; one step-daughter, Beth Ann (Brian) Mitchiner; seven grandchildren, Andrew, Jennifer, Jared, Kyle, Hannah, Patrick and Abby; two great grandchildren, Campbell and Harrison; and many extended family and friends. A gathering for family and friends will be Saturday, December 16, 2017 from 12:00 noon to 1:00 p.m. at the Herr-Riggs Funeral Home, 210 S. Main St., Middletown, followed by Military Honors at 1:00 p.m. by the Middletown Combined Honor Guard and a Celebration of Life service with his son, Stuart Morris officiating, all at the funeral home. Arrangements by Herr-Riggs Funeral Home, 210 S. Main St., Middletown. Condolences may be sent to the family at www.herr-riggs.com

The family of GERALD W. "GERRY" MORRIS created this Life Tributes page to make it easy to share your memories.

Send flowers to the MORRIS family.