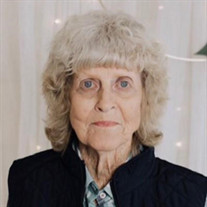 ENRIGHT, Gladys, born May 16, 1934, in Powell County, Kentucky as Zelma Gladys Morgan, died of pneumonia on Tuesday, March 1, 2022 at Atrium Medical Center, Middletown, Ohio. Her passing is mourned by her two daughters, Barbara (Tom) Rolls and Kathy (Kirk) Bogard. She was Grandma and “Gma” to her two grandsons who were the light of her life: Jarrod Kirk Bogard of Rowlett, Texas and Cody Garrett (Alyssa) Bogard of Sulphur Springs, Texas. She leaves behind one sister, Bessie L. (David) Wiles of Bowling Green, Kentucky and several nieces and nephews. Her parents, Everett Edward and Ida Mae Tucker Morgan, brothers, Joseph Morgan and Everett Edward Morgan, Jr., sisters Geneva Starrett, Alta Wells, Alvis Thompson and Bethel Jean Morgan all preceded her in death. Billy Fletcher, her longtime companion, also preceded her in death. Gladys grew up in Kentucky and graduated from Wolfe County High School in Campton, Kentucky. Upon her graduation, her family moved to Middletown where she spent most of her life. After being a factory worker for thirty plus years, she retired from Schneider Electric. While still working, she studied for and received her beautician’s license and operated her own beauty salon in Middletown. Because of her love for crafts, she later converted her salon into a craft shop. She was a member of the Women of the Moose 183. Upon retirement, she moved to Gainesville, Florida where she obtained her CNA license and worked as a healthcare worker for individuals and nursing homes. She attended Trinity Baptist Church of Lake Butler, Florida where her son-in-law Kirk pastored; and she received Jesus Christ as her personal Savior. After living fourteen years in Florida, she returned to Middletown, Ohio. Gladys followed the Lord in believer’s baptism and became a member of Grace Baptist Church where Max Fernandez is Pastor. Gladys was known for her excellent work ethic, her kindness and love to others, and her love for candy. She loved her church family at Grace Baptist, and they in turn showered her with love and affection and her favorite sweets. Please join us as we celebrate her homegoing. Visitation will be Saturday, March 12, 2022 from 10:00 a.m. to 12:00 noon at Herr-Riggs Funeral Home, 210 S. Main St., Middletown, Ohio, followed by services at 12:00 noon with Pastor Rodney Hedge officiating. Interment will be at Woodside Cemetery, Middletown. In lieu of flowers, memorial contributions may be made in her name to St. Jude’s Children’s Hospital, 262 Danny Thomas Drive, Memphis, Tennessee 38105. Arrangements by Herr-Riggs Funeral Home, 210 S. Main St., Middletown. Condolences may be sent to the family at www.herr-riggs.com

The family of GLADYS ENRIGHT created this Life Tributes page to make it easy to share your memories.

Send flowers to the ENRIGHT family.