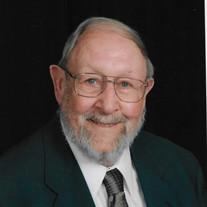 DIEFENBACH, Jack, age 86, of Monroe, Ohio, passed away Wednesday, March 6, 2019 at his residence. He was born February 13, 1933 in Middletown. He served in the U.S. Navy during the Korean Conflict from 1952 to 1954. Jack earned his Bachelor of Science Degree in Business Administration from Miami University in Oxford, Ohio. He had a Registered Real Estate License from State of Ohio and State of Florida, and had a Private Pilot License. Jack was employed by his father at Diefenbach Dental Lab from 1955 to 1965, then worked in the accounting department at AK Steel for 20 years. He and his wife Sue then owned the Stained Glass Overlay Design Studio in Jupiter, Florida from 1986 to 1998. While in Middletown he served as past President of Elementary, Junior High and High School Parent Teacher Organizations, was past President of Flaps and Aeronca (both local flying clubs for private pilots), past City Chairman of Crippled Children’s Drive, active on golf and lodge committees at Forest Hills Country Club, active member of First United Methodist Church since 1955, and sang with their choir for over 50 years, sang with the Butler Philharmonic Chorus and Middletown Civic Chorus, was active in and made two trips with the P.R.O.M.I.S.E.S. mission group of the church to Japan in 1969 and 1976, served on the Board of Trustees at the church, and was active on his High School Class Reunion Committee. While in Jupiter, Florida he was a member of the local Chamber of Commerce, member of Palm Beach County HBCA and served on the membership committee, was a member of the choir at Jupiter-Tequesta Methodist Church, and twice served as past President of Homeowners Association. Jack, a person of numerous talents and abilities, loved life, his family and being active in everything he participated in. Preceding him in death were his parents, James and Ruth (nee Fisher) Diefenbach; one daughter, Denise Matz; and one brother, Richard “Dick” Diefenbach. He is survived by his wife of 63 years, Sue Diefenbach; one daughter, Janet (David) Lynch; two grandsons, Chris (Annie) Noble and son Luka, and Matt (Erin) Noble and children Carson and Amelia; and many extended family and many friends. There will be a Celebration of Life Service on Sunday, March 17, 2019 at 3:00 p.m. with visitation from 2:00 p.m. at the First United Methodist Church, corner of Second and Broad Streets (120 South Broad St.,) Middletown, Ohio 45044 with Rev. John Wagner officiating. In lieu of flowers, memorial contributions may be made to the First United Methodist Church Choir. Arrangements by Herr-Riggs Funeral Home, 210 S. Main St., Middletown. Condolences may be made to the family at www.herr-riggs.com

The family of JACK DIEFENBACH created this Life Tributes page to make it easy to share your memories.

Send flowers to the DIEFENBACH family.