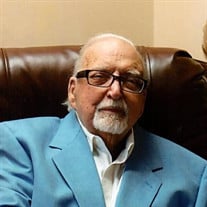 WILLIAMS, Jack, age 90, of Middletown, Ohio, passed away Wednesday, October 9, 2019 at Mount Pleasant Village in Monroe where he had been a residence since April 2019. His wife Bette Lou and Daughters were at his side. He was born September 20, 1929 in Connersville, Indiana to Jack and Helen Williams. Jack attended grade school in Trenton, Ohio and graduated from Monroe High School where he met the love of his life, Bette Lou Augsberger. Jack and Bette Lou married on June 25, 1949, at St. Mary’s Catholic Church, the first marriage in the newly constructed church. They recently celebrated their 70th wedding anniversary. Jack was employed by Armco Steel for 48 years, retiring as a metallurgical observer. He was a Civil War buff, read many books, and visited sites of the Civil War. He had a grand tenor voice, was in many high school programs. After graduating he sang for the Middletown Symphony Orchestra as guest soloist, many weddings as soloist and at the Civic Chorus. Both he and Bette Lou sang in the Holy Trinity Church choir for 25 years. Always singing, he would sing along with his favorite Pavarotti recordings at home. One of their favorite vacation sites was Williamsburg, Virginia, the historic village and surrounding areas. One evening at dinner in the restored area, a strolling musician asked Jack to sing. He had been playing ballads and Jack was humming along. Jack sang one of the favorites, “Oh Danny Boy”. The entire restaurant had tears in their eyes when he finished. He was a very friendly and outgoing person and will be missed by all. Jack was the last of his family. Mother, Father, three sisters and a brother are all deceased. Jack and Bette Lou have three daughters, Lisa, Marilee Anne and Jill; granddaughter Cathy; great grandchildren, Liam and Callie Lou. There will not be a visitation. Mass of Christian Burial will be Monday, October 14, 2019 at 1:00 p.m. at the Holy Family Parish, Holy Family Church, 201 Clark Street, Middletown, Ohio, with Rev. John Civille as celebrant. Interment will be at Woodside Cemetery, Middletown, Ohio. Arrangements by Herr-Riggs Funeral Home, 210 S. Main St., Middletown. Condolences may be sent to the family at www.herr-riggs.com

WILLIAMS, Jack, age 90, of Middletown, Ohio, passed away Wednesday, October 9, 2019 at Mount Pleasant Village in Monroe where he had been a residence since April 2019. His wife Bette Lou and Daughters were at his side. He was born September... View Obituary & Service Information

The family of JACK WILLIAMS created this Life Tributes page to make it easy to share your memories.

Send flowers to the WILLIAMS family.