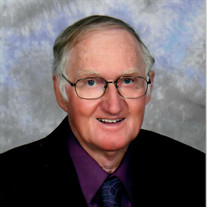 SEBASTIAN, James C. “J. C.”, age 85, of Franklin, Ohio, went to be with the Lord on Tuesday, October 24, 2017 at 5:00 p.m. at Otterbein Lebanon Retirement Community where he had been a resident for six weeks. He was born July 16, 1932 in Cannel City, Morgan County, Kentucky and moved to Middletown in 1952. He was employed as a Shipping Supervisor at Armco for 36 years retiring in 1990. He was a member of the Towne Boulevard Church of God since 1991, where he served as an Usher and a member of the Board of Trustees, and did maintenance work at the church. He was a wonderful husband and enjoyed being with his family and friends. He enjoyed boating, water skiing and fishing at Cumberland Lake with his family. The family extends their special thanks and appreciation to the staffs of Otterbein and the Otterbein Hospice for their professional and loving care of “J. C.” during his illness. Preceding him in death were his parents, Press and Nancy (Nickel) Sebastian; his first wife, Pricilla Finch Sebastian in 1990; and two brothers, Ernest and Carlisle Sebastian. He is survived by his wife of 26 years, Juanita Montgomery Sebastian; one daughter, Amelia (Dennis) Baker; one step-son, Rev. Randy (Shannon) Montgomery; one granddaughter, Bethany Montgomery; four grandsons, Brandon Montgomery, Bradley Montgomery, Benjamin Montgomery and Brian Fox; many nieces, nephews, extended family and a host of special friends. Visitation will be Monday, October 30, 2017 from 5:00 p.m. to 7:00 p.m. at the Towne Boulevard Church of God, 3722 Towne Boulevard, Middletown, Ohio 45005, followed by services at 7:00 p.m. with Pastor Mark Jackson and his son, Rev. Randy Montgomery officiating. A graveside service will be Tuesday, October 31, 2017 at 2:00 p.m. at the Ezel Cemetery, Ezel, Kentucky with Rev. Randy Montgomery and Rev. Allen Hutchinson officiating. Memorial contributions may be made to the Towne Boulevard Church of God, 3722 Towne Boulevard, Middletown, Ohio 45005. Arrangements by Herr-Riggs Funeral Home, 210 S. Main St., Middletown. Condolences may be made to the family at www.herr-riggs.com

The family of JAMES C. "J. C." SEBASTIAN created this Life Tributes page to make it easy to share your memories.

Send flowers to the SEBASTIAN family.