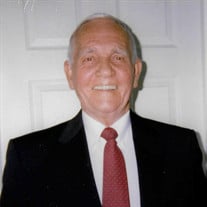 WYATT, James “Jay”, age 91, of Trenton, Ohio, passed away Tuesday, September 21, 2021 at Atrium Medical Center. He was born May 21, 1930 in Blue Ash, Ohio and was raised in upstate New York. Jay enlisted in the U. S. Navy and was a Petty Officer during the Korean Conflict. Jay attended college in Boston, Massachusetts. He also attended numerous schools and seminars, always studying aerospace and radar procedures. He joined Aeronca Inc. as an inspector, and remained in the aerospace business for forty-three years, retiring as Executive Director of Aerospace in Nashville, Tennessee. Jay received numerous awards for quality assurance from Fairchild Aerospace, Martin Merrith Aerospace, F.A.A. for control of both military and civilian aircraft and space shuttle programs. Jay enjoyed woodworking, fishing and working in his yard. He also enjoyed weight lifting. Preceding him in death were his parents, Luster and Mae (Clarke) Wyatt; and his only son James “Jay” Wyatt who he loved so very much. He is survived by his loving wife, Peggy (Gibbs) Wyatt (they had a beautiful marriage of 71 years); one sister, Geraldine Morreale; and other extended family and friends. Per his request, there will be a private visitation and funeral service at Herr-Riggs Funeral Home, 210 S. Main St., Middletown, with Pastor Bobby Reed officiating. Private interment will be at Butler County Memorial Park, Trenton, Ohio. In lieu of flowers, he requested that memorial contributions may be made to PAWS of Middletown. Arrangements by Herr-Riggs Funeral Home, 210 S. Main St., Middletown. Condolences may be sent to the family at www.herr-riggs.com

The family of JAMES "JAY" WYATT created this Life Tributes page to make it easy to share your memories.

Send flowers to the WYATT family.