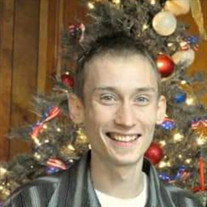 THOMPSON, Jason E., age 38, of Germantown, Ohio, went to be with the Lord on Saturday, August 21, 2021 after a battle with meningitis, complicated by heart failure and strokes, at the Kettering Medical Center where he had been a patient for three weeks. He was born October 25, 1982 in dayton, Ohio and lived in the Miami Valley area all his life. He was employed in culinary Management at Bravo at the Dayton Mall. Jason was a magnetic, fun-loving man who lived unabashedly, lived for his children’s happiness and was loved by many. He loved spending time with his two children, and enjoyed the outdoors and nature. Preceding him in death were his wife, Ciera (nee Powell) Thompson in 2020; one brother Scott Beyersdoerfer; his maternal grandfather, Don Drake; and his paternal grandparents, JoAnn and Thomas E. Thompson, Jr. He is survived by two children, Braiden E. Thompson and Caydence R. Thompson; his mother and stepfather, Caprice and Allen Beyersdoerfer; his father and step mother, David E. Thompson, Sr. and Mary; five brothers, Tim (Breana) Thompson, David E. Thompson, Jr., Joshua (Lindsey) Beyersdoerfer; Doug Shaw and Allen Beyersdoerfer, Jr.; six sisters, Skylar Thompson, Marieanne Brown, Danielle Lyons, Michelle Birchfield, Natalie Coffey, and Kim Beyersdoerfer; and many extended family and friends. Visitation will be Saturday, August 28, 2021 from 1:00 p.m. to 2:00 p.m. at the Beechwood Church of God, 12800 Ohio Rt. 122, in Gratis, Ohio, followed by services at 2:00 p.m. with Pastor Gary Agee officiating. Interment will be at Fairview Cemetery, Gratis, Ohio. Memorial contributions may be made to the family in care of the Beechwood Church of God, P. O. Box 581, Gratis, Ohio 45330 Arrangements by Herr-Riggs Funeral Home, 210 S. Main St., Middletown. Condolences may be sent to the family on this website, www.herr-riggs.com

THOMPSON, Jason E., age 38, of Germantown, Ohio, went to be with the Lord on Saturday, August 21, 2021 after a battle with meningitis, complicated by heart failure and strokes, at the Kettering Medical Center where he had been a patient for... View Obituary & Service Information

The family of JASON E. THOMPSON created this Life Tributes page to make it easy to share your memories.

Send flowers to the THOMPSON family.