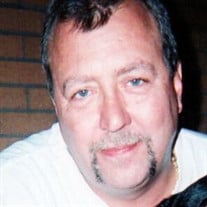 DUHAMEL, John Michael “Mike”, age 50, of Middletown, Ohio, passed away Wednesday, April 19, 2017 at Miami Valley Hospital in Dayton where he had been a patient for one week. He was born December 10, 1966 in Middletown and lived here all his life. He was a self-employed carpenter. Mike was an avid outdoorsman and enjoyed fishing and hunting. Preceding him in death were his parents, John and Ernestine Lee Duhamel; and one brother, Chuck Colwell. He is survived by his wife of 9 ½ years, Lorie Duhamel; two daughters, Machele Duhamel and Tabitha Duhamel; three grandchildren, Justice Duhamel, Gracie Whitaker and Rylee Whitaker; one sister, Tracy Smith; two step-children, Brittany Combs and Matt Combs; three step grandchildren; and extended family and friends. Visitation will be Monday, April 24, 2017 from 12:00 noon to 2:00 p.m. at the Herr-Riggs Funeral Home, 210 S. Main St., Middletown, followed by services at 2:00 p.m. with Rev. Clay Colwell officiating. Interment will be at Woodside Cemetery, Middletown, Ohio. Arrangements by Herr-Riggs Funeral Home, 210 S. Main St., Middletown. Condolences may be sent to the family at www.herr-riggs.com

The family of JOHN MICHAEL "MIKE" DUHAMEL created this Life Tributes page to make it easy to share your memories.

Send flowers to the DUHAMEL family.