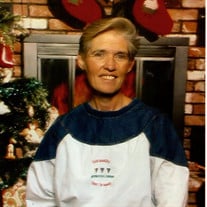 CLAY, Joyce L., age 70, of West Carrollton, formerly of Middletown, passed away Monday, June 29, 2020 at her daughter’s residence in Middletown. She was born September 27, 1949 in Middletown, and lived in this area most of her life except for 20 years in northern Ohio. She was employed as an LPN at Apple Creek State Hospital near Wooster. She then was a Phlebotomist for LabCorp, and then a Phlebotomist for Christ Hospital for one year. For the past 20 years she was a hairdresser for Herr-Riggs Funeral Home in Middletown. Joyce had many hobbies and interests that she enjoyed including Bingo, fishing, cooking, crafting and crocheting, Si-Fi Movies, and shopping at yard sales and thrift stores. She loved watching WWE Wrestling. She especially loved spending time with her grandchildren and family. Preceding her in death was her father, James Clay; her mother, Phyllis Gibbs Zinsmeister; one grandson, Travis Jeandervin in 2019; and three sisters, Rebecca Downs in 2019, Kathleen Curry and Susan Brown. She is survived by two daughters, Kathysue (Jeff) Milbauer and Karen Kroger (Keith Chandler); two grandchildren, Samuel Milbauer and Kaleigh Jeandervin; one sister, Cynthia Weckel; five nieces and nephews, Courtney (Matt) Niles, Emillie Downs, Brian Brown, Shawn Adkins and Tabitha Adkins; many great nieces and great nephews, special mention of Robert Jeandervin and Langda Brockman; and many extended family and friends. Visitation will be Sunday, July 5, 2020 from 1:00 p.m. to 3:00 p.m. at the Herr-Riggs Funeral Home, 210 S. Main St., Middletown, followed by services at 3:00 p.m. with Dr. Dan Flory officiating. Private interment will be at Woodside Cemetery, Middletown, Ohio. Arrangements by Herr-Riggs Funeral Home, 210 S. Main St., Middletown. Condolences may be sent to the family at www.herr-riggs.com

CLAY, Joyce L., age 70, of West Carrollton, formerly of Middletown, passed away Monday, June 29, 2020 at her daughter&#8217;s residence in Middletown. She was born September 27, 1949 in Middletown, and lived in this area most of her life except... View Obituary & Service Information

The family of JOYCE L. CLAY created this Life Tributes page to make it easy to share your memories.

Send flowers to the CLAY family.