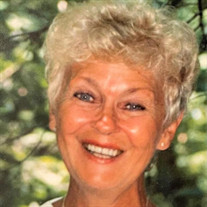 NEWKIRK, June, age 86, of Middletown, Ohio passed away Friday, November 26, 2021 at Atrium Medical Center. She was born January 3, 1935 in Anderson Township, Ohio. June was a sales representative for Roger’s Jewelry for 30 years. She was a member of the V.F.W., D.A.V. and Women of the Moose. Preceding her in death were her parents, Francis and Opal (Marcum) Lawson, her husband, Tom in 2010; three sons, Matt Dennis in 2003, Adam Dennis in 2008 and Mitchell Dennis in 2014; one grandson, Zachary Dennis in 2012; one brother, Paul Lawson; one sister, Betty Berzsenyi; and three step-children, Tom M. Newkirk, Don Dawkin and Trish McDaniel. She is survived by one son, Joseph McCann; daughter-in-law, Rosemary Dennis; three grandchildren, Ashley Dennis, Mitzi (Stacy) Jackson and Kristal Bryant; three step-children, Kim Cullen, Dixie Abston and Shane (Linda) Newkirk; and many extended family and friends. Private services will be at the convenience of the family. Arrangements by Herr-Riggs Funeral Home, 210 S. Main St., Middletown. Condolences may be sent to the family at www.herr-riggs.com.

The family of JUNE NEWKIRK created this Life Tributes page to make it easy to share your memories.

Send flowers to the NEWKIRK family.