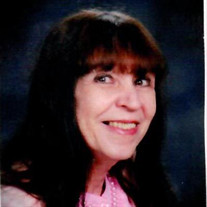 SORRELL, Karen A. “Pinkie”, age 70, of Trenton, Ohio, passed away Thursday, October 5, 2017 at Atrium Medical Center where she had been a patient for eight days. She was born June 20, 1947 in Middletown and lived in this area all her life. She had been employed as a waitress at Liberty Restaurant, and also worked as an aide in Home Health Care. Karen loved spending time with her family. She was a member of the Spring Hill Church of Christ. Preceding her in death were her parents, George and Helen (Gregor) King; three sisters, Emmie Venters, Sandra Spencer and Earnie Sargent; and one brother, Gene King. She is survived by her husband of 47 years, Gene Sorrell; two sisters, Sherry King and Mary King; four brothers, George King, Jackie King, Dale King and Mikey King; and many nieces, nephews, extended family and friends. Visitation will be Tuesday, October 10, 2017 from 11:00 a.m. to 1:00 p.m. at the Spring Hill Church of Christ, 2021 Brell Dr., Middletown, Ohio 45042, followed by services at 1:00 p.m. with Bob Stacy, Minister, officiating. Interment will be at the Butler County Memorial Park, Trenton, Ohio. Arrangements by Herr-Riggs Funeral Home, 210 S. Main St., Middletown. Condolences may be sent to the family at www.herr-riggs.com

The family of KAREN A. "PINKIE" SORRELL created this Life Tributes page to make it easy to share your memories.

Send flowers to the SORRELL family.