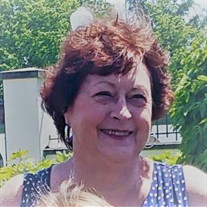 STITSINGER, Kathleen Ann, age 70, of Middletown, Ohio passed away Monday, December 17, 2018 at her residence. She was born December 22, 1947, in St. Louis, Missouri to Alex and Lucille Watts. She graduated from Fairmont East High in Kettering, Ohio and received her B.S. Degree from Miami University where she was a member of Alpha Omicron Pi. She received her Master’s Degree from Wright State. Kathy taught in the Middletown School District for 33 years. She sold real estate with her good friend, Chris Sanzone, for Sawyer Realtors. She was a member of Alpha Delta Kappa. She enjoyed reading, gardening, playing cards with her many bridge friends and traveling with the J Group. Kathy played golf at Forest Hills where she had a hole in one. She is survived by her husband of 49 years, Dennis Stitsinger; her children, Ryan (Molly) Stitsinger and Jill (Joel) Phillips; was beloved Nana to Reiley, Ella, Gavin, Quinn and Violet. Also survived by her brother, Dr. Alex (Rebecca) Watts; four nephews, Ian, Mathew, Craig and Michael; and brother-in-law, Jack (Debbie) Stitsinger. She also leaves behind her dear friends, “The Lindas”. Preceding her in death were her parents. A Celebration of Life will be Saturday, December 29, 2018 from 2:00 p.m. to 6:00 p.m. at the Forest Hills Country Club, 791 Fourth Ave., Middletown, Ohio 45044. In lieu of flowers, memorial contributions may be made to Hospice of Middletown, 3909 Central Ave., Middletown, Ohio 45044 or to Pancreatic Cancer Action Network. The family extends their personal thanks and appreciation to Dr. Richard Chamberlain for his loving and professional care of Kathy during her illness. Arrangements by Herr-Riggs Funeral Home, 210 S. Main St., Middletown. Condolences may be sent to the family at www.herr-riggs.com

STITSINGER, Kathleen Ann, age 70, of Middletown, Ohio passed away Monday, December 17, 2018 at her residence. She was born December 22, 1947, in St. Louis, Missouri to Alex and Lucille Watts. She graduated from Fairmont East High in Kettering,... View Obituary & Service Information

The family of KATHLEEN ANN STITSINGER created this Life Tributes page to make it easy to share your memories.

Send flowers to the STITSINGER family.