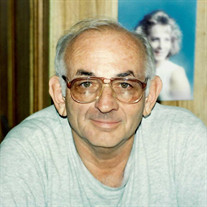 BAILEY, Kent L. affectionately known as “Beetle Bailey”, age 84, of Middletown, Ohio passed away Tuesday, April 26, 2022 at his residence. He was born March 22, 1938 in Hazard, Kentucky but lived in Middletown most of his life. He graduated from Lemon-Monroe High School Class of 1956. Kent was employed in #2 maintenance and BOF Maintenance at AK Steel for 34 years, retiring in 1992. He enjoyed watching professional wrestling and NASCAR, especially Richard Petty #43, and attended the Daytona 500 for over 40 years. Preceding him in death were his parents, Lummie and Rosella (Phillips) Bailey; his wife Dolly M. Bailey in 1999; and one daughter Melanie A. Bailey. He is survived by three daughters, Vicki S. O’Daniel, Cindy S. (Doug) Tuttle and Christa M. (Chuck) Buchanan; nine grandchildren, Shannon, Tara, Ryan, Raynor, Brandy, Joshua, Justin, Bryant and Bradley; and many great grandchildren, extended family and friends. Visitation will be Friday, April 29, 2022 from 11:00 a.m. to 1:00 p.m. at the Herr-Riggs Funeral Home, 210 S. Main St., Middletown, followed by services at 1:00 p.m. with Pastor Mick Salyer officiating. Interment will be at Woodhill Cemetery, Franklin, Ohio. If desired, memorial contributions may be made to the American Cancer Society. Arrangements by Herr-Riggs Funeral Home, 210 S. Main St., Middletown. Condolences may be sent to the family at www.herr-riggs.com

The family of KENT L. "BEETLE BAILEY" BAILEY created this Life Tributes page to make it easy to share your memories.

Send flowers to the BAILEY family.