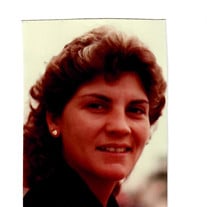 HALL, Kimberly “Kim”, age 61, of Middletown, Ohio, passed away Saturday, December 16, 2017 at Arlington Pointe where she had been a patient for two weeks. She was born December 16, 1956 in Middletown and lived here all her life. Kim was a wonderful daughter and sister and a loving caregiver to her mother for many years. She was an avid fan of Tim Tebow, as well as the Cincinnati Reds and Cincinnati Bengals. Preceding her in death were her father, James Hall; and two brothers, Thomas Hall and Bobby Hall. She is survived by her mother, Joyce Boone Hall; one sister Lori J. (Doug) Ritter; three brothers, James Jr. (Janie) Hall, Ricky (Kristy) Hall and Ross (Danielle) Hall; numerous niece, nephews, extended family and friends. Visitation will be Wednesday, December 20, 2017 from 12:00 noon to 1:00 p.m. at the Herr-Riggs Funeral Home, 210 S. Main St., Middletown, followed by services at 1:00 p.m. with Dr. Dan Flory officiating. Interment will be at Germantown Cemetery, Germantown, Ohio. Arrangements by Herr-Riggs Funeral Home, 210 S. Main St., Middletown. Condolences may be sent to the family at www.herr-riggs.com

The family of KIMBERLY "KIM" HALL created this Life Tributes page to make it easy to share your memories.

Send flowers to the HALL family.