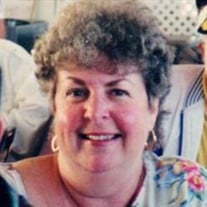 STEINMETZ, Loretta Jean Cornelius, age 76, of Trenton, Ohio, passed away Saturday, January 18, 2020 at her residence. She was born December 5, 1943 in San Diego, California. Loretta was a member of the Yankee Road First Church of God and... View Obituary & Service Information

The family of LORETTA JEAN CORNELIUS STEINMETZ created this Life Tributes page to make it easy to share your memories.

Send flowers to the STEINMETZ family.