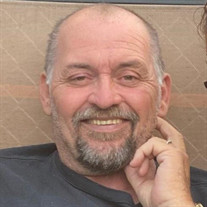 McGlothen, Jr., Mark Edwin, passed away peacefully in the home of his daughter December 26, 2020, surrounded by his family after a short battle with cancer. Mark fought to the end but always had given his life into the hands of his Lord and Savior, Jesus Christ. He was born November 26, 1964 in Middletown, and lived here most of his life. He graduated from Madison High School Class of 1983. Mark had wanted to serve in the U.S. Army but unfortunately had to take a medical discharge after a short stay. He was employed as a truck driver for 37 years, and most recently for J. B. Hunt. Mark was a member of the First Christian Church of Sandusky. Preceding him in death was his father, Mark Edwin McGlothen, Sr.; his brother, Anthony McGlothen; maternal grandparents, Nona (Shackelford) and Hamp Chambers; paternal grandparents, Emma (Griggs) and Howard McGlothen; his mother-in-law, Jody Owen; and two of his best friends, Rick Davis and Tim Adkins. He is survived by his wife of 10 ½ years, Kathy Jo (Zielske) McGlothen of Sandusky where they had been residing for the past two years; his mother, Gwendolyn (Chambers) McGlothen of Middletown; his children, Heather (Joseph) Huff, Mark (Christina) McGlothen III, Samantha Jo (John) Gray, (former son-in-law) James Coning; Ron (Becky) Hile of Sandusky, and Samantha Leigh Walker of Louisville, Kentucky; the loves of his life—his grandchildren, Joseph “Joey”, Haylee, and Bailey Huff, Alexandria, Mark IV, and Zachary McGlothen, Bryce and Matthew Coning, and Nicolette and Ronnie Hile; three sisters, Pamela Murrill, Lisa (Rick) Cottongim and Jennifer Highley; his brothers from another mother and father, Randall Parsons of Lima, Ohio and Eugene Sullivan of London, Kentucky; and several aunts, uncles, nieces, nephews, cousins, extended family and a host of friends. At Mark’s request, he chose to be cremated. The family will receive friends on Saturday, January 16, 2021 from 1:00 p.m. to 3:00 p.m. at the Poasttown First Church Of God, 6376 Middletown-Germantown Road, Middletown, (Poasttown). A Memorial Service will follow at 3:00 p.m. at the church with his minister from Sandusky, Pastor Don Spurlock, officiating. The church will be open at 12:00 noon to receive flowers and items of sympathy for the family. Memorial donations may be made to the Multi Media Fund of First Christian Church, 3410 Hayes Ave., Sandusky, Ohio 44870 where he was a beloved member. Arrangements by Herr-Riggs Funeral Home, 210 S. Main St., Middletown. Condolences may be sent to the family at this website, www.herr-riggs.com

McGlothen, Jr., Mark Edwin, passed away peacefully in the home of his daughter December 26, 2020, surrounded by his family after a short battle with cancer. Mark fought to the end but always had given his life into the hands of his Lord and... View Obituary & Service Information

The family of MARK EDWIN McGLOTHEN JR. created this Life Tributes page to make it easy to share your memories.

McGlothen, Jr., Mark Edwin, passed away peacefully in the home...

Send flowers to the McGLOTHEN family.