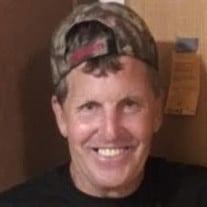 LAKES, Randall Lee, age 58, of Lebanon, Ohio, passed away Saturday, November 30, 2019. He was born September 15, 1961 in Hamilton, Ohio, and graduated from Edgewood High School Class of 1979. He served in the U.S. Army from 1979 to 1985. He was employed as the lead carpenter for 15 years at A to Z Construction Company, owned by his brother, and previously as the Bleach Plant Supervisor at Miami Paper Company for 19 years. He also was employed at his sister’s company, JKL Cleaning. He was a member of the American Legion Post 218 and a lifetime member of the V.F.W. Post 3409. Preceding him in death was his father, Eugene Lakes in 2019. He is survived by two children, Brandon Lakes and Ashley Lakes and Tara; one grandson, Jaycob Eugene Ray Lakes; one brother Rick Lakes and Connie; one sister, Brenda Kay Chapman and Robert; his mother, Jackie Batcher Grant and William; and many nieces, nephews, extended family and friends. Visitation will be Thursday, December 5, 2019 from 6:00 p.m. to 8:00 p.m. at the Herr-Riggs Funeral Home, 210 S. Main St., Middletown. Funeral services will be Friday, December 6, 2019 at 10:30 a.m. at the funeral home with Pastor Curtis Moak officiating. Interment will be at Butler County Memorial Park, Trenton, Ohio with Military Honor Guard services. In lieu of flowers, memorial contributions may be made to the Alzheimer’s Association. Arrangements by Herr-Riggs Funeral Home, 210 S. Main St., Middletown. Condolences may be sent to the family at www.herr-riggs.com

The family of RANDALL LEE LAKES created this Life Tributes page to make it easy to share your memories.

Send flowers to the LAKES family.