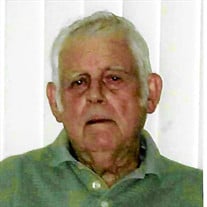 DUFF, Robert “Bobby” age 89, of Middletown, passed away Sunday, December 27, 2020 at Carlisle Manor where he had been a patient for three weeks. He was born July 3, 1931 in Flat Creek, Kentucky and moved to Ohio in 1943. Bobby served in the U.S. Army during the Korean Conflict from 1952 to 1953. He was employed for 40 years as a factory supervisor at Miami Carey retiring in 1987. He was a member of the American Legion Post 218 for over 30 years. The family extends their special thanks and appreciation to the staff, nurses and caregivers of Carlisle Manor and the nurses and caregivers of Hospice of Middletown for their loving and supportive care of their father and our family during his illness. Preceding him in death were his parents, Adrian and Mary Ellen (McClain) Duff; two brothers, James and his wife Eunice and Douglas and his wife Thelma; two sisters, Clara Mull and her husband Robert; Daisy Trimble and her husband Dwight; and his brother-in-law, Greg Buschur. He is survived by his wife of 65 years, Jeanne L. (Brandenburg) Duff; two children, Marty (William) Morgan and Robert D. (Lynn) Duff; seven grandchildren, Brittanie, Jamie, Matt, Drew, Lyndi, Mike and Chris; twelve great grandchildren; his sister, Okie Buschur; and many nieces, nephews, extended family and friends. Visitation will be Thursday, December 31, 2020 from 12:00 noon to 1:00 p.m. at the Herr-Riggs Funeral Home, 210 S. Main St., Middletown, followed by services at 1:00 p.m.at the funeral home with Pastor Chuck Wolfinbarger officiating. Interment will be at Woodside Cemetery, Middletown, with Military Honors by the Middletown Combined Honor Guard. Arrangements by Herr-Riggs Funeral Home, 210 S. Main St., Middletown. Condolences may be sent to the family at www.herr-riggs.com

The family of ROBERT H DUFF created this Life Tributes page to make it easy to share your memories.

Send flowers to the DUFF family.