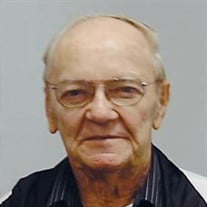 GOUGHENOUR, Robert E. “Bob”, age 93, of Trenton, Ohio passed away Wednesday, April 29, 2020 at his residence. Bob was born March 7, 1927 in Johnstown, Pennsylvania and moved to the Miami Valley area in Ohio in the late 1950’s. He served in the U.S. Navy. Bob was employed in the masonry department at AK Steel before his retirement. He was a member of the Word of God Church in Moraine, Ohio, and was very active in the church. He also enjoyed following all the local sports teams. Preceding him in death were his parents, Herman and Lydia Ramsell Goughenour; his first wife Shirley; his second wife, Imogene and most recent wife, Mary Lou Goughenour on October 24, 2019; one daughter, Lillian Ditke; one step-son, Tony Ray Wood; one step grandson, Robert Jarrod Ward; and three brothers, Jim, Bill and Fred. He is survived by three children, Roberta Craig, Larry (Rachel) Goughenour and Robert (Marilyn) Goughenour; five step children, Debbie Fernandez, Jeffery (Mary) Wood, David Jack Wood, Kimberly Ward (Brady Skinner) and Renee Lynn Wood; nine grandchildren; many great grandchildren; one sister Betty; many nieces, nephews, extended family and friends. A private visitation will be at the convenience of the family at Herr-Riggs Funeral Home, 210 S. Main St., Middletown. There will be a graveside service open to the public with everyone encouraged to follow the social distancing guidelines issued by the State of Ohio, on Wednesday, May 6, 2020 at 2:00 p.m. at Woodside Cemetery, in the Military Section, Middletown, Ohio, with Pastor David Zornes officiating. The U.S. Navy Honor Guard will present military services. Interment will follow. Arrangements by Herr-Riggs Funeral Home, 210 S. Main St., Middletown. Condolences may be sent to the family at www.herr-riggs.com

The family of ROBERT E. "BOB" GOUGHENOUR created this Life Tributes page to make it easy to share your memories.

Send flowers to the GOUGHENOUR family.