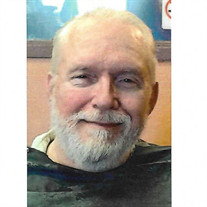 HALL, Robert Kenneth, age 78, of Middletown, passed away Thursday, December 24, 2020 at Fort Hamilton Hospital. Robert was born June 25, 1942 in Middletown and grew up in Trenton. Bob joined the Army after High School and was posted in Germany. After his honorable discharge, he worked at several local businesses while attending The University of Cincinnati and Miami University in Oxford, Ohio, where he completed two degrees in Engineering. Bob worked at the IRS office in northern Kentucky for thirty years. He retired at 70 years of age in 2012. He lived in Cincinnati until a diagnosis of Dementia resulted in his move to Bickford Senior Living in Middletown. Our family wants to thank the Staff at Bickford for their care and friendship during Bob’s residence. Preceding him in death were his parents, James Arthur and Fanny Ellen (Brown) Hall; his brother and sister-in-law, Michael and Linda Hall; and two nephews, Michael Anthony Hall and Joey Hall. He is survived by one brother, James P. (Janice) Hall; one sister Anita (John) Bugitzedes; one nephew, John Christopher Bugitzedes; one great nephew, Michael Craig (Monica) Hall; two great-great nephews, Walker and Weston Hall; one great-great niece, Courtney Hall; cousins, Kay (Paul) Brown Gray, Jeanie Brown Lopez, Jeff Barnes, Jenny DeJarnett Mills, Robert Clark, Susie and Timothy Clark; and many extended family and friends. To avoid the risk of furthering the transmission of the Covid Virus, there will be no visitation. Immediate family only graveside service at Woodside Cemetery. In lieu of flowers, memorial contributions may be made in his name to Hospice of Cincinnati. Arrangements by Herr-Riggs Funeral Home, 210 S. Main St., Middletown. Condolences may be sent to the family at www.herr-riggs.com

HALL, Robert Kenneth, age 78, of Middletown, passed away Thursday, December 24, 2020 at Fort Hamilton Hospital. Robert was born June 25, 1942 in Middletown and grew up in Trenton. Bob joined the Army after High School and was posted in Germany.... View Obituary & Service Information

The family of ROBERT KENNETH HALL created this Life Tributes page to make it easy to share your memories.

Send flowers to the HALL family.