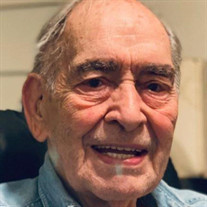 SPECHT, Robert E., age 95, of Middletown, Ohio, passed away Saturday, April 23, 2022 at the Dayton V.A. Medical Center where he had been a patient for 10 days. He was born June 3, 1926 in Middletown, Ohio. He served in the U.S. Army during WW II. He was a Metallurgical Technician at ARMCO Steel Company and retired in 1990 after 40 years of service. Bob attended the Monroe First Church of God in Monroe, and was a member of the American Legion Post 218. He was an animal lover and enjoyed working in his yard. Preceding him in death were his parents, William and Margaret (Tewart) Specht; his wife, Nellie Specht in 1997; one daughter Mary Alice King; and two sisters, Dorothy Kaufman and Eileen Downey. He is survived by one son, William E. (Bonnie) Specht; four grandchildren, Melissa (Scott) Kerr, Lindsey Dennis, Kathy (Bruce) King and Sheila (Keith) Wright; many great grandchildren, great-great grandchildren; one sister, Margaret Janet Rowan; and several nieces and nephews, extended family and friends. Visitation will be Tuesday, May 3, 2022 from 11:00 a.m. to 1:00 p.m. at the Monroe First Church of God, 100 Easton Manor Drive, Monroe, Ohio 45050, followed by services at 1:00 p.m. with Pastor Mick Salyer officiating. Interment will be at Butler County Memorial Park, Trenton, Ohio, with Military Honors by the Army Honor Guard and Middletown Combined Honor Guard. Arrangements by Herr-Riggs Funeral Home, 210 S. Main St., Middletown. Condolences may be sent to the family on this website, www.herr-riggs.com

The family of ROBERT E. SPECHT created this Life Tributes page to make it easy to share your memories.

Send flowers to the SPECHT family.