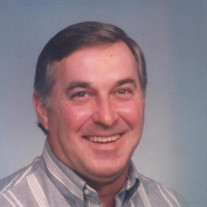 WAGNER, Robert “Wag”, age 77, of Trenton, Ohio, passed away Friday, December 13, 2019 at Atrium medical Center where he was a patient for 17 days. He was born February 9, 1942 in Middletown and graduated from Middletown High School. He was employed as a Melter in the B.O.F. at AK Steel for 30 years retiring in 2003. He also was employed in the Maintenance Department for the City of Fairfield for 10 years. He was an avid fisherman, a NASCAR fan, and enjoyed racing stock cars. Preceding him in death were his parents, Ruth (Kelly) and Robert John Wagner, Sr.; and granddaughter, Lori Ann Blanton. He is survived by his wife of 52 years, Ann Wagner; three children, Deborah Blanton, Lance Allen Stanley and Michael Shane Wagner I; nine grandchildren, five great grandchildren; one brother, James (Pat) Wagner; one sister, Barbara (Fred) Dakin; and several nieces, nephews, extended family and friends. There will be a Celebration of Life at the Edgewood Baptist Church in Trenton, Ohio, on Thursday, January 9, 2020 at 6:00 p.m. with Pastor Keith Risner officiating. A memorial dinner will follow at the church after the service. Arrangements by Herr-Riggs Funeral Home, 210 S. Main St., Middletown. Condolences may be sent to the family at www.herr-riggs.com

The family of Mr. Robert "Wag" Wagner created this Life Tributes page to make it easy to share your memories.

Send flowers to the Wagner family.