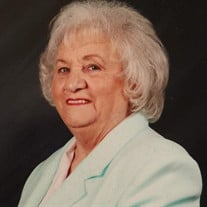 MAYNE, Rose Ellen Collier, age 84, of Middletown, Ohio peacefully went to be with her Lord and Savior Saturday, May 9, 2020 at her residence. Rose was born October 2, 1935 in Middletown to the late Brack Collier and Dorothy Ouida (Gibbs) Collier-Clarke. When Rose was 18 she married her late husband Jack Corwin Mayne in Richmond, Indiana. Jack was in the United States Air Force and was stationed in Ohio, Maine, Alabama, and Alaska where Rose moved with him and their three sons until he retired from the USAF and began working at AK Steel. Rose was a full time, stay-at-home mother and homemaker and made sure her family was well taken care of. When Rose was younger, she was a skating carhop for the root beer stand in Poasttown, Ohio and also loved to go around with her brother James dancing at clubs. The family resided in Middletown throughout the rest of their days in the same house they finished raising the boys in, which was right around the corner from the house she was born in. Rose was a member of the First Church of The Nazarene in Middletown, the Daughters of the American Revolution and the U.S.O. Club. Along with her parents and husband, Rose was preceded in death by her step-father Perry Clarke Sr., her sister Marla Jean (Collier) Melton, and her brothers James Louis Collier and Brack Collier Jr. She is survived by her brother Perry Lynn (Jane) Clarke and her sons Gary Lynn Mayne, Terry Lee Mayne, and Lawrence Collier (Melissa) Mayne. She is also survived by 5 grandchildren and 1 step-grandchild, 7 great-grandchildren, and several nieces, nephews, and cousins. Visitation will be Thursday, May 14, 2020 from 1:00 p.m. to 2:00 p.m. at the Herr-Riggs Funeral Home, 210 S. Main St., Middletown, followed by services at 2:00 p.m. with Rev. Chuck Purvis officiating. Interment will be at Woodside Cemetery, Middletown. Memorial contributions may be made to the American Cancer Society. Arrangements by Herr-Riggs Funeral Home, 210 S. Main St., Middletown. Condolences may be sent to the family at www.herr-riggs.com

MAYNE, Rose Ellen Collier, age 84, of Middletown, Ohio peacefully went to be with her Lord and Savior Saturday, May 9, 2020 at her residence. Rose was born October 2, 1935 in Middletown to the late Brack Collier and Dorothy Ouida (Gibbs) Collier-Clarke.... View Obituary & Service Information

The family of ROSE ELLEN COLLIER MAYNE created this Life Tributes page to make it easy to share your memories.

Send flowers to the MAYNE family.