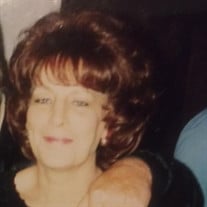 ROWLAND, Sherry I., age 69, of Middletown, Ohio, passed away Wednesday, November 11, 2020 at Hospice of Butler and Warren Counties where she had been a patient for two weeks. She was born March 14, 1951 in Franklin, Ohio and was raised both... View Obituary & Service Information

The family of SHERRY I. ROWLAND created this Life Tributes page to make it easy to share your memories.

Send flowers to the ROWLAND family.