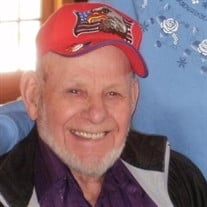 LONG, Stanley “Doc”, age 92, of Trenton, Ohio, passed away Friday, September 27, 2019 at his residence. He was born April 26, 1927 to Edward and Laura May (Cooper) Long in Middletown and lived here all his life. He was employed as a truck driver for Dumford Trucking retiring in 1981. He also was a farmer on West Alexandria Road in West Middletown. Stanley was a veteran of W.W. II serving as a U.S. Marine in Guam. He was a lifetime member of the American Legion Post 218, Loyal Order of Moose #501, the Fraternal Order of Eagles #528 and V.F.W. He loved to go dancing, especially square dancing, and enjoyed playing cards. Preceding him in death were his parents; his wife of 50 years, Mary C. Long in 2011; step-daughter, Velma C. Hewitt; one sister, Margie Poffinbarger and one brother, Ralph Long. He is survived by his twin sister, Stella Hatfield; sister-in-law, Frances Long; niece, Betty Beatty Hancock; dear friend, Martha Kamps, best friend, Earshel Philpot; and many friends. Visitation will be Friday, October 4, 2019 from 12 noon to 1:00 p.m. at the Herr-Riggs Funeral Home, 210 S. Main St., Middletown, followed by services at 1:00 p.m. with Dr. Dan Flory officiating. Interment will be at Greenwood Cemetery, Hamilton, Ohio, with military services by the Middletown Combined Honor Guard. Memorial contributions may be made to Hospice of Butler and Warren Counties, 5940 Long Meadow Dr., Franklin, Ohio 45005. Arrangements by Herr-Riggs Funeral Home, 210 S. Main St., Middletown. Condolences may be sent to the family at www.herr-riggs.com

The family of STANLEY "DOC" LONG created this Life Tributes page to make it easy to share your memories.

Send flowers to the LONG family.