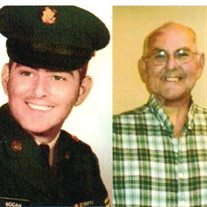 BOGAN, Steven R., 72, of Franklin, Ohio was welcomed into the Lord’s arms on Saturday, October 19, 2019. He was a beloved husband, father and grandpa who battled Alzheimer’s disease for four years but passed away peacefully with his wife and three daughters by his side. He was born in Middletown, Ohio on July 19, 1947. He loved sports and played baseball and football in school. He graduated from Madison High School and studied Journalism, English and History at Kent State and Miami University. From 1966-1968 he bravely served his country in the U.S. Army in Vietnam earning the rank Sergeant 1st Class. After he was discharged from the service he began working for AK Steel as an inspector where he retired after 31 years. He also was employed by the West Chester Post Office and the Franklin Library. Dad was an avid reader his entire life and always enjoyed the newest Tom Clancy or Clive Cussler novel. He loved playing video games and listening to country music. He was a cowboy at heart and loved watching westerns such as Bonanza or anything with John Wayne. He was also a big football fan and rooted for the Raiders every Sunday. Dad so enjoyed the holidays, especially Halloween and Christmas. He loved the cool weather and fall foliage. He would religiously turn on Christmas music every November 1st. He was a big history buff, especially American History. He loved beautiful sunsets and lighthouses. Dad was completely selfless and always put his family first. He was truly a family man and spent his entire life doting on his wife, children and grandchildren. He impacted so many lives and his memory will live on in all the hearts he touched. He was baptized in 2015 and we have peace knowing he is with his savior Jesus Christ as well as his beloved Grandma Cora. He is preceded in death by his parents, one sister and one infant brother. He is survived in death by his wife and soulmate of almost 47 years, Carlene Bogan. He is also survived by his three daughters Ursula Keith (Billy) of Middletown, Rachel Rose (Matt) of Mason, and Dakota Bogan of Monroe. He leaves behind six grandchildren; Nathan, Scarlett, Lillie, Bella, Vivian and Oliver, one great grandchild Ayden, and one surviving brother Joel Bogan (Debbie). We wish to sincerely thank the Hospice of Dayton for the wonderful care given to Dad during his last few weeks. Andrea and Jamie’s compassionate and kind support is so very appreciated. Visitation will be held on Wednesday, October 23, 2019 from 11:00 a.m. to 1:00 p.m. at the Herr-Riggs Funeral Home, 210 S. Main St., Middletown, followed by services at 1:00 p.m. with Rev. Freddie Powers officiating. Interment will be at North Monroe Cemetery, 301 N. Main St. Monroe, Ohio. Condolences may be sent to the family at www.herr-riggs.com

BOGAN, Steven R., 72, of Franklin, Ohio was welcomed into the Lord&#8217;s arms on Saturday, October 19, 2019. He was a beloved husband, father and grandpa who battled Alzheimer&#8217;s disease for four years but passed away peacefully with... View Obituary & Service Information

The family of STEVEN R BOGAN created this Life Tributes page to make it easy to share your memories.

Send flowers to the BOGAN family.