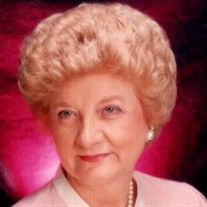 OBITUARY FOR SYLVIA BATES DEATON: DEATON, Sylvia Bates, age 86, of Middletown, Ohio passed peacefully away Friday February 9, 2018 at Carlisle Manor where she had been a patient since January 29. She was born February 28, 1931 in Hazard, Kentucky and moved to Middletown in December of 1954. Sylvia served as financial secretary at First Baptist Church in San Angelo, Texas, then worked at Raymond Bag of Middletown, OH. She served as financial Secretary at Floorcraft with her husband Bill Deaton, and then with the new owner, retiring in 2015. She was a wife, mother of three children, grandmother and great-grandmother. There are things worth celebrating and Sylvia's life is one of those. We are so privileged to have had her in our lives and to have shared life with her. Sylvia exemplified a life well lived. She would tell you that she was an accountant by training but a volunteer at heart having served 25 years with Hospice Care of Middletown. Sylvia had a special talent of connecting with and touching others' lives in positive ways. She had the uncanny ability to sense when someone needed compassion, even complete strangers. In these instances she was known to give the individual an angel lapel pin. She has given away hundreds of angel pins and in this way her ministry of compassion towards others spread across Middletown. Her altruism was apparent even in simple interactions where she always made a point to focus on you and why you were so special. Whether she was sharing home cooked meals, a box of baked treats at Christmas time, a floral arrangement, or an angel pin, her goodness had life changing affects. Her encouragement often was enough to help others rise above their trials because when hope faltered, her faith was enough to sustain us all. She believed in and encouraged others to make more out of what they already had. She was a healer of spirits. She will truly be missed by her family and her friends. Preceding her in death were her parents, Rev. T.G. and Anna (Moore) Bates; One brother. T.G. Bates; and two sisters, Elsie Sinor and Minnie Yancey. She is survived by her loving and devoted husband of 66 1/2 years, Bill A Deaton. She will also be deeply missed by her three children, Debi Deaton Stapleton, husband Larry Stapleton, Staci Deaton and husband Bob Goodwin; Aaron Deaton and wife Christy (Jenia) Deaton; five grandchildren Jake Stapleton, Heather Stapleton Payne, Kali Goodwin, Luke Deaton and Thomas Deaton; three great grandchildren, Henry Whalin, Brynn Stapleton and Billy Payne; one brother Ira James Bates; two sisters, Eleanor Sizemore and Margaret Blackmore. A celebration of Sylvia's life will be held at Central Connections (Senior Center Of Middletown), 3907 Central Ave, Middletown, OH, on April 28th at 1 PM. Chaplain June Downing, of Hospice Care of Middletown, will preside over the celebration of Sylvia Deaton's life. Those who so desire may make memorial contributions in memory of Sylvia Deaton to Hospice Care of Middletown, 3909 Central Ave, Middletown, OH 45044. Arrangements by Herr-Riggs Funeral Home, 210 S. Main St., Middletown. Condolences may be sent to the family at www.herr-riggs.com.

OBITUARY FOR SYLVIA BATES DEATON: DEATON, Sylvia Bates, age 86, of Middletown, Ohio passed peacefully away Friday February 9, 2018 at Carlisle Manor where she had been a patient since January 29. She was born February 28, 1931 in Hazard, Kentucky... View Obituary & Service Information

The family of SYLVIA BATES DEATON created this Life Tributes page to make it easy to share your memories.

Send flowers to the DEATON family.