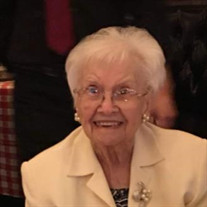 CAUDILL, Thelma Elizabeth, age 100, formerly of Middletown, Ohio, went to her heavenly home to be with her family and her Lord Jesus, on Sunday, March 24, 2019, in Tampa, Florida where she had lived with her daughter for the past nine years. Thelma was born November 30, 1918 in Menifee County, Kentucky to Obadiah and Nora Alice (Denniston) Barker. They moved to Middletown and Thelma attended Middletown High School. Shortly thereafter, she married the love of her life, J. Herschel Caudill, and they were married for 65 years. He became an ordained minister, and Thelma served beside him for many years in churches at Neon, Kentucky, New Pittsburg and Kokomo, Indiana, Germantown, Ohio, and Indianapolis before returning to pastor their home church, Breiel Boulevard First Church of God in Middletown. Thelma was so loving, giving and compassionate to her husband, children and grandchildren, as well as to the extended Barker/Caudill families and all her church families. She was active in many of the activities of the church, and was also involved in the Ladies Aide and Missionary Societies of the church, including Project Partners located here in Middletown. She traveled the world, and spent the last nine years living in Florida with her beloved daughter, Carin. Hers was a life well-lived, a loving and faithful servant to all and a living example of her dedication to her Lord and His church. Preceding her in death were her parents; her husband, Rev. J. Herschel Caudill in 2001 as well as all eight of her brothers and sisters and their spouses. She is survived by her daughter, Carin McClellan; her son, Dr. Darrell R. (Helen) Caudill; five grandchildren, Cristin Snodgrass Younker, Jeffrey “Clay” Snodgrass, Darrell R. Caudill, Jr., James Chadwick Caudill and Dr. Travis Caudill; five great grandchildren; her caregiver who is like a daughter to her, Lesther Rodriguez; many nieces and nephews, of both the Barker and Caudill families; and many extended family, friends, and the Breiel Boulevard church congregation and their pastors who were so loving, giving and compassionate to her and the entire Caudill family. Visitation will be Tuesday, April 2, 2019 from 12:00 noon to 1:00 p.m. at the Breiel Boulevard First Church of God, 2000 North Breiel Boulevard, Middletown, Ohio 45042, followed by services at 1:00 p.m. with Dr. David Sebastian and Pastor Wes Duff officiating. Entombment will be at Woodside Mausoleum, Middletown, Ohio. In lieu of flowers, the family would like memorial contribution be made in her name to the Breiel Boulevard First Church of God, 2000 North Breiel Boulevard, Middletown, Ohio 45042. Arrangements by Herr-Riggs Funeral Home, 210 S. Main St., Middletown. Condolences may be sent to the family at www.herr-riggs.com

CAUDILL, Thelma Elizabeth, age 100, formerly of Middletown, Ohio, went to her heavenly home to be with her family and her Lord Jesus, on Sunday, March 24, 2019, in Tampa, Florida where she had lived with her daughter for the past nine years.... View Obituary & Service Information

The family of THELMA ELIZABETH CAUDILL created this Life Tributes page to make it easy to share your memories.

Send flowers to the CAUDILL family.