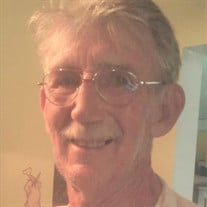 DOYLE, JR., Thomas, age 72 of Franklin, Ohio, passed peacefully on Monday, November 29, 2021 at Atrium Medical Center. He was born August 19, 1949 in Middletown, Ohio the son of Tom Sr. and Emma Doyle. Thomas was a master carpenter by trade and a highly skilled home builder for the majority of his life. Thomas was a father to two sons, a grandfather, and had lived a life of hard work. He took joy in his family, fishing, boating, croquet and playing cards whenever he could. In 2013, Thomas was diagnosed with multiple medical conditions that were discovered. His retirement, that he had worked so hard to achieve, was wrought with doctor visits and hospital stays. He still had many moments of joy. To his sons, Thomas Doyle was the hardest working man they had ever known their entire life. To his friends, he often made jokes and loved playing pranks on the family at times. He will be greatly missed and his absence will be felt by all who knew him. He was preceded in death by both of his parents; his brothers, Carl Ray Doyle of Clarksville, Ohio and Freeman Doyle of Ft. Pierce, Florida; and most recently his sister, Joyce Terry, also of Ft. Pierce, Florida. Thomas leaves behind his former wife, Patricia, mother to both of his sons and friend for over 43 years; his sons, Todd Aaron Doyle and Michael Thomas Doyle; his only grandson, Navin Doyle all of Franklin, Ohio; two brothers, Don and Joe Doyle both of Florida; two sisters, Connie Doyle of Florida and Susan (Doyle) Jordan of Clarksville, Ohio and many nieces, nephews, cousins, and other family members who dearly loved him and whom he loved. Before his death, Thomas asked the family to take care of each other and encouraged all of us to love one another. Our family would like to especially thank everyone who prayed for Thomas Doyle during his last hospital stay. God bless all of you and thank you for your emotional support and love. Per Thomas’ wishes, he will be interred at the family cemetery outside Oneida, Kentucky on Memorial Day of 2022 next to his parents. He did not wish to have a funeral. Arrangements by Herr-Riggs Funeral Home, 210 S. Main St., Middletown. Condolences may be sent to the family on this website, www.herr-riggs.com

The family of THOMAS DOYLE JR created this Life Tributes page to make it easy to share your memories.

Send flowers to the DOYLE family.