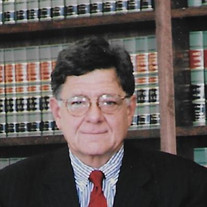 SWOPE, Thomas Arden “Tom”, age 70, passed away unexpectedly at home on Wednesday, September 19, 2018. He was born August 26, 1948 in Middletown and lived here most his life. Tom was devoted to his family, to his native Middletown, and to the practice of law. Son of the late Arden and Jeanne (Weber) Swope, he leaves behind his beloved family: Debbie, his wife of 45 years, their sons and families--Ben and Erin, Reed and Anna Swope, and Andy and Laura, Avery and Owen Swope; siblings Elaine Swope Noland, Betsy Swope Waddell, and Richard (Betsy) Swope. He is also fondly remembered by many cousins, nieces and nephews, extended family, friends, colleagues and clients. A graduate of Fenwick High School (1966) and John Carroll University (1970), Tom received his law degree from the University of San Francisco Law School (1973). For his first five years as an attorney Tom worked for the National Labor Relations Board based in San Francisco. Tom and Debbie returned to Middletown in 1977, and Tom joined the law firm Levey & Levey, later merging with Frost Brown Todd. He retired from the active practice of law in 2015. In addition to his work as an attorney, Tom held interests in real estate development. He was active in many volunteer roles, including fundraising for Middletown's Bicentennial Commission, Fenwick High School, Atrium Medical Center, and the United Way. He served on the Boards of various organizations, often as an officer: Middletown/Butler County Bar Association, Arts in Middletown (President), Middletown Area Development Enterprises—M.A.D.E, Chamber of Commerce (President), Browns Run Country Club (President). He helped to initiate John Boehner's annual golf outing, the Boehner Birdie Hunt. Tom adored his grandchildren, spending time with them at home and on family vacations. He did not hesitate to report evidence of their various superior attributes. Tom loved the game of golf and the many friendships that developed from it. As a child, he caddied for his uncle (also a lawyer). Tom claimed that he became a lawyer because he wanted to be in profession that allowed him to play often. He was a valuable playing partner because of his competitive spirit and quick wit. There will be a time of greeting for family and friends on Tuesday, September 25, 2018 from 11:30 a.m. to 12:00 noon at the Holy Trinity Chapel – Holy Family Parish, 210 Clark Street, Middletown, Ohio, 45044, followed by a Memorial Mass at 12:00 noon with Rev. John Civille as Celebrant. Suggested memorials in lieu of flowers: Middletown Area Neediest Youth (M.A.N.Y.), 1337 Barton Lane, Lebanon OH 45036; or Middletown Community Foundation, Swope Fenwick Fund, 300 N. Main St, Middletown OH 45042. Arrangements by Herr-Riggs Funeral Home, 210 S. Main St., Middletown. Condolences may be sent to the family at www.herr-riggs.com

The family of THOMAS ARDEN SWOPE created this Life Tributes page to make it easy to share your memories.

Send flowers to the SWOPE family.