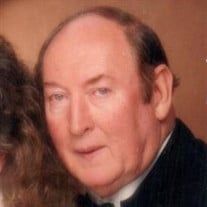 TERRELL, Venice Weldon, age 84, of Middletown, Ohio, passed away Tuesday, August 22, 2017 at his residence. He was born December 27, 1932 in Menifee County, Kentucky and moved to Ohio in 1969. He graduated from Frenchburg High School in 1952. He was employed as a packer at Diamond International/Jefferson Smurfit for 25 ½ years. He was a member of the Yankee Road Pentecostal Church of God in Christ. He loved to go to church, loved his family, friends, class reunions and his calico cat, Princess. He loved to sing “God On The Mountain” with his wife Linda. Most of all he loved Jesus and his family. Preceding him in death were his parents, James Lee and Zelma Mae (Sorrell) Terrell; one son, Venice Lee Terrell; two sisters, Vada Wasson and Maxine Terrell; and his special brother-in-law, Floyd Pelfrey. He is survived by his wife of almost 46 years (September 5), Linda Agee Terrell; three children, Paula (Emerson) Williams, Sylvia (Jason) Nettles and Kenneth Terrell; five grandchildren; eight great grandchildren; one sister, Alene Pelfrey; one brother, Russell Dexter (Sharon) Terrell; and several nieces, nephews, extended family and friends. Visitation will be Friday, August 25, 2017 from 6:00 p.m. until time of service on Saturday, August 26, 2017 at 10:00 a.m. at the Yankee Road Church of God in Christ, 3117 Yankee Road, Middletown, Ohio 45044. Pastor Bob Frost will conduct the service. Interment will be at the Woodside Cemetery, Middletown, Ohio. Arrangements by Herr-Riggs Funeral Home, 210 S. Main St., Middletown, Ohio. Condolences may be sent to the family at www.herr-riggs.com

TERRELL, Venice Weldon, age 84, of Middletown, Ohio, passed away Tuesday, August 22, 2017 at his residence. He was born December 27, 1932 in Menifee County, Kentucky and moved to Ohio in 1969. He graduated from Frenchburg High School in 1952.... View Obituary & Service Information

The family of VENICE WELDON TERRELL created this Life Tributes page to make it easy to share your memories.

Send flowers to the TERRELL family.