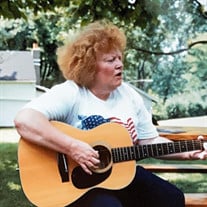 DEATON, Virginia “Ginger”, age 85, of Middletown, Ohio passed away Monday, January 3, 2022 at Franklin Ridge Skilled Nursing Center where she had been a patient for two weeks. She was born June 2, 1936 in Middletown and lived here all her life. She married the love of her life JC Deaton September 1952, whom she remained devoted to until his death in 2018. Ginger left working at K-Mart to help with taking care of her three grandsons. Later she worked at Meijer as a door greeter for many years until retiring. She was a life-long member of the First Church of God. Her passion was singing and helping those in need. She sang in Church and loved going to visit the shut-ins and nursing homes. She enjoyed being a member of the Republican Party and especially liked helping people. Preceding her in death were her parents, Reese and Carmon (Fletcher) Morrison; her husband JC Deaton in 2018; one sister, Nancy Weber; and four brothers, Kenny, Lawrence, Benny and Shannon. She is survived by her only child, daughter Jill (Steve) Jankovich; three grandchildren, Wayne (Laura) Jankovich, Brian (Jeanie) Jankovich and Andrew Jankovich with whom she had a special bond; four great grandchildren; one sister, Joyce Patrick; and many dear nieces and nephews; special friend, Pam Booth, and many extended family and friends. A gathering of family and friends will be held on Saturday, January 8, 2022 from 3:00 p.m. to 4:00 p.m. at Herr-Riggs Funeral Home, 210 S. Main St. Middletown, Ohio, 45044, followed by a Memorial Service at 4:00 p.m. with Pastor Todd Wallen officiating. Private interment will be at Butler County Memorial Park, Trenton, Ohio. If desired, memorial contributions may be made to Ohio Valley Hospice, 11590 Century Boulevard, Cincinnati, Ohio 45246. Condolences may be sent to the family on this website, www.herr-riggs.com

DEATON, Virginia &#8220;Ginger&#8221;, age 85, of Middletown, Ohio passed away Monday, January 3, 2022 at Franklin Ridge Skilled Nursing Center where she had been a patient for two weeks. She was born June 2, 1936 in Middletown and lived here... View Obituary & Service Information

The family of VIRGINIA "GINGER" DEATON created this Life Tributes page to make it easy to share your memories.

Send flowers to the DEATON family.