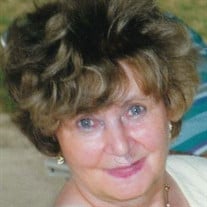 JOHNSON, Virginia Lee, age 85 of Franklin, Ohio passed away on Sunday, August 4, 2019 at her residence. She was born June 22, 1934 in Middletown and lived in this area all her life. Virginia babysat for 20 years and loved all her “kids”. She was employed for 25 years as a Meals On Wheels driver and then later as a secretary at Central Connections, formerly Middletown Senior Citizens Center. She was a member of St. Paul's United Church of Christ and enjoyed flower gardening, following politics, reading and her pets. Preceding her in death were her parents James and Ida Bach Stork Sr., her husband, Winford Johnson in 2001 and one brother James Stork, Jr. She is survived by two children, Lori Crawford and husband William III and Steven Johnson and wife Grechille; five grandchildren, William John Crawford IV, Kyle Crawford, Cody James Crawford, Gabrielle Johnson and Gianna Johnson; her niece Diane Stork Norton, two nephews, David Stork and Richard Johnson; and her great nephew Andrew Norton, beloved cousins Judi Lickert Mattingly and Robin Alder. There will be a memorial on Friday August 9, 2019 at 2 pm at Central Connections, 3909 Central Avenue in Middletown, Ohio. Memorial contributions can be made to Hospice Care of Middletown or Central Connections, both at 3909 Central Avenue in Middletown 45044. Arrangements by Herr-Riggs Funeral Home, 210 S. Main Street, Middletown. Condolences may be sent to the family at www.herr-riggs.com.

The family of VIRGINIA LEE JOHNSON created this Life Tributes page to make it easy to share your memories.

JOHNSON, Virginia Lee, age 85 of Franklin, Ohio passed away on...

Send flowers to the JOHNSON family.