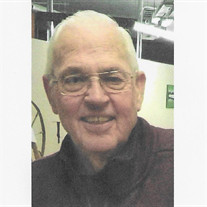 DONAHUE, William N., age 81, of Middletown, Ohio, passed away Monday, October 29, 2018 at Hospice of Butler and Warren Counties, where he had been a patient for six days. He was born July 15, 1937 in DeMossville, Kentucky but lived in Ohio most of his life. He was employed as a truck driver at Sorg Paper Company, and then at Air Products and Chemicals. He served as Vice President of Teamsters Local 834. He had driven the Shuttle Bus for Middletown Senior Citizens Center. William was a member of the Breiel Boulevard First Church of God, where he served as an usher. He was president and volunteer fireman for South Middletown Fire Department from 1964 to 1969. He was a Kentucky Colonel, and enjoyed playing Blue Grass and Gospel Music with the Grassy Creek Knights at the Pendleton Art Center on Fridays and at McDonald’s on Saturday mornings. Preceding him in death was his father, William Alvin Donahue; his mother, Mary Louise Spencer Donahue; and his step-mother, Roberta Donahue. He is survived by his wife of 60 years, Marcella Hatton Donahue; four children, Kimberly (William) Burton, Susan Downey, William Todd (Rhonda) Donahue and Amy (Scott) McGuire; ten grandchildren, William (Jennifer) Burton, Shawn (Lori) Burton, Matthew Burton, Molly Burton, Amanda Downey, Andrew Downey, Mikal Donahue, Magen Donahue, Taylor (Keanu) Kuhn and Rachel McGuire; five great grandchildren, two sisters, Virginia (Herb) Gansheimer and Judith McKibben; several nieces, nephews, extended family; his Joseph’s Legacy Rescue Dog, Daisy; special friends, Cyndi Hay and Kara Grubbs, and many, many other friends. There will be a time of greeting for family and friends on Friday, November 2, 2018 from 10:00 a.m. to 11:00 a.m. at the Breiel Boulevard First Church of God, 2000 North Breiel Boulevard, Middletown, Ohio 45042, followed by a Celebration of Life Service at 11:00 a.m. at the church with Pastor Jake Garmany officiating. In lieu of flowers, memorial contributions may be made to Joseph’s Legacy, P. O. Box 3, Middletown, Ohio 45042 or to Hospice of Butler and Warren Counties, 5904 Long Meadow Dr., Middletown, Ohio 45005. Arrangements by Herr-Riggs Funeral Home, 210 S. Main St., Middletown. Condolences may be sent to the family at www.herr-riggs.com

DONAHUE, William N., age 81, of Middletown, Ohio, passed away Monday, October 29, 2018 at Hospice of Butler and Warren Counties, where he had been a patient for six days. He was born July 15, 1937 in DeMossville, Kentucky but lived in Ohio... View Obituary & Service Information

The family of WILLIAM N. DONAHUE created this Life Tributes page to make it easy to share your memories.

Send flowers to the DONAHUE family.