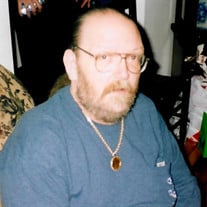 TILLETT, JR., William “Butch”, age 68, of Middletown, Ohio, passed away Tuesday, March 20, 2018 at Atrium Medical Center where he had been a patient for one week. He was born June 11, 1949 in Middletown and lived here all his life. He was employed in the Dye Room at Interstate Folding Box, retiring in 1983. He was raised in the Nazarene Church. Butch was a member of Elks Lodge 257 of Middletown, Eagles Aerie in Gratis, Ohio, Moose Lodge 501 in Middletown and Orioles Nest in Middletown. Butch was an avid poker player, fisherman and camper. Judy extends her special thanks to his many friends he met playing poker for helping her take care of him over the years. Preceding him in death were his father, William Tillett; his mother Ida Brewer McGraw and special step-father, Elmer McGraw; and one brother, Jack Tillett. He is survived by his wife of 45 years, Judy Tillett; three sons, William Tillett and fiancée Sarah, Christopher Tillett, and Bryan Tillett and fiancée Stephanie; ten grandchildren, William, Jason, Anthony (Ina), Sarah, Christopher, Kyra, Cora, Isaiah, Carmine and Madison; brother-in-law, Willis; very special sister-in-law, Linda; one niece; two nephews; best friend, Mike “Monk” Myers; his many poker friends; and many extended family and friends. Visitation will be Monday, March 26, 2018 from 11:00 a.m. to 1:00 p.m. at the Herr-Riggs Funeral Home, 210 S. Main St., Middletown, followed by services at 1:00 p.m. with Rev. Willis Patrick and Pastor Kenny Stamm officiating. Interment will be at Butler County Memorial Park, Trenton, Ohio. Arrangements by Herr-Riggs Funeral Home, 210 S. Main St., Middletown. Condolences may be sent to the family at www.herr-riggs.com

The family of WILLIAM "BUTCH" TILLETT JR. created this Life Tributes page to make it easy to share your memories.

Send flowers to the TILLETT family.