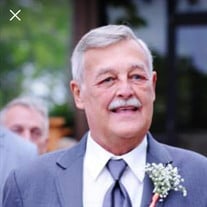 McNABB, William Edward “Bill”, age 84, of Middletown, Ohio, passed away Thursday, June 21, 2018 at his residence. He was born November 27, 1933 in Bath County, Kentucky, and moved to Ohio as a teenager. He graduated from Lemon-Monroe High School Class of 1953. Bill served in the U.S. Army, and was a Foreman in technical Repair at Armco Steel retiring in 1989 after 35 years of service. He was a member of American Legion Post 218, V.F.W. Post 3809, Eagles Aerie #528, and Jefferson Lodge F.& A.M. Preceding him in death were his parents, Elmer and Mattie (nee Helton) McNabb; one son, William Charles McNabb and one daughter, Karen Ann Allen. He is survived by his wife of 57 years, Patricia A. McNabb; one son, Stephen R. (Paula) Oaks; one daughter, Cathy Hughes; three grandsons, Brady (Sarah), Erich (Kari), and Christopher Joel; one granddaughter, Cara (Chris) Sorrell; four great grandchildren, one brother James (Shirley) McNabb; and many extended family and friends. The family extends their special thanks to special friends, Michelle Meyer and Tom Colliver. There will be a service on Saturday, June 30, 2018 at 11:00 a.m. at the Woodside Cemetery, Cremation Facility Niche Front, with Pastor Steve Elkins officiating. Military honors will be conducted by the Middletown Combined Honor Guard. In lieu of flowers, memorial contributions may be made to the V.F.W. Post 3809 or the American Legion Post 218. Arrangements by Herr-Riggs Funeral Home, 210 S. Main St., Middletown. Condolences may be sent to the family at www.herr-riggs.com

The family of WILLLIAM EDWARD "BILL" McNABB created this Life Tributes page to make it easy to share your memories.

Send flowers to the McNABB family.